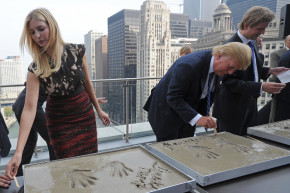 These commemorative handprints could reveal the true size of Donald Trump's hands, but they've disappeared 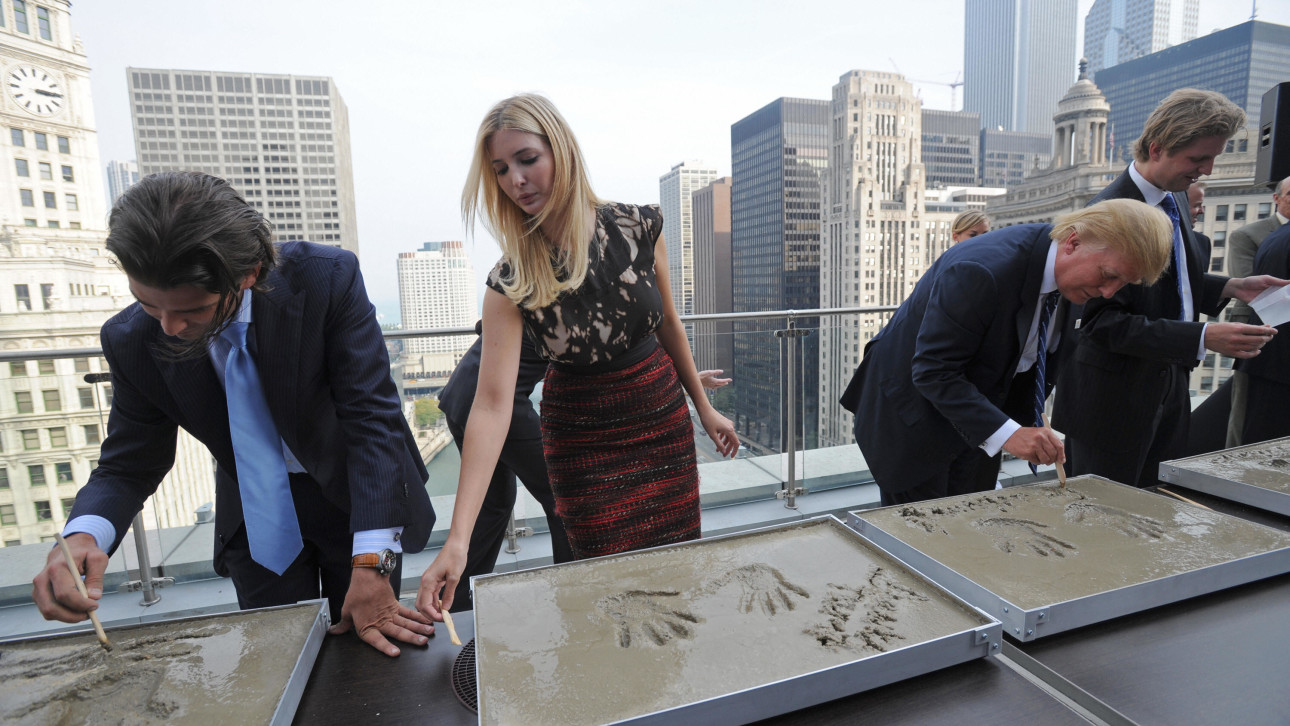 On September 24, 2008, Donald J. Trump pressed his hands into a plate of wet cement, creating a permanent record of their size at a public event attended by press and photographers. Now, less than six years later and deep into the strangest presidential season in memory, those prints seem to have disappeared.

The 2008 event took place nine days after Lehman Brothers went bankrupt, plunging America into the Great Recession. Trump stood on the 16th floor terrace of the the nearly completed Trump International Hotel and Tower in Chicago—then the tallest American skyscraper erected since the Twin Towers collapsed—and spoke of the state of the nation.

Then he and three of his children walked over to a row of plates filled with wet cement. “This is a real mess. Only for you people would I do this. You ready?” Donald Trump said before pressing his hands into the goop. “I don’t want to tell you what that feels like.”

The family signed their names under the impressions. Earlier in the event, attendees had been informed that Trump’s handprints would be incorporated into the structure of the flagship Trump Tower.

Trump has battled accusations around his hand size since 1987 when Spy magazine first referred to Trump as a “short-fingered vulgarian.” Now that the mogul is the frontrunner for the Republican nomination, the issue has again flared up. Comments from Marco Rubio put Trump on the defensive earlier this year, and inspired activists to create a PAC dedicated to uncovering Trump’s true hand measurements (and led to an unfortunate national conversation about what Trump’s allegedly small fingers might also indicate). These cement handprints could provide objective proof and settle the issue once and for all. However, they are seemingly nowhere to be found.

“They didn’t say where they were going to place them at the press conference,” NPR correspondent Cheryl Corley told Vocativ. Corley attended the topping-off ceremony and interviewed Chicagoans about local dissatisfaction with the mammoth addition to the skyline. “There’s been controversy around him ever since that building was built … The building that had been there before [Chicago Sun-Times building] was very low and provided access to the river, so this was just blocking it out. And the fact that it was Trump—there was some disgruntlement over that, just because of who his is.”

Local discontent has only grown in the five years since. In 2011, Trump launched the birther movement against Chicago’s favorite son, Barack Obama. In 2014, Chicagoans lamented Trump’s addition of his name to the building with 20-foot-tall stainless steel letters. Since Trump officially launched his Republican presidential campaign in July of 2016, thousands of Chicagoans have been holding their one-fingered protests with Instagram posts of themselves flicking off the Tower. But on March 11 of this year, all that anger came to a head when Trump had to cancel a Chicago rally amidst security concerns because of the large turnout of anti-Trump protestors.

Earlier that day, Vocativ went to Trump Tower in search of the Donald Trump handprints. We went to every area of the building that was accessible to the public. We surveyed the outside perimeter, the lobby, the Rebar bar and the Sixteen restaurant. Trump’s handprints were nowhere to be found. Unfortunately, the Terrace at Trump is closed until May 1. Yes, the very 16th floor terrace where the Trump family made the handprints.

The Terrace at Trump is now the bar and restaurant that provides patrons with one of the city’s best views of Chicago River and Lake Michigan. It has palm trees, lounge seating and a floor composed of hundreds of cement squares. But not a single one of those squares bears Donald Trump’s handprints—according to a man who’d know.

“Literally every angle that you could possibly walk, I walked. I can’t think anywhere where it could be,” Pablo Villarreal told Vocativ. Villarreal served as the Trump International Hotel and Tower’s food and beverage supervisor for the first three years of its opening. He worked on the Terrace every summer and says he never saw handprints.

Henry Kraemer, founder of the Trump Has Tiny Hands PAC (which has since been ordered to change its name) said he is not surprised that the Trump Organization is not forthcoming with proof of the size of Trump’s hands. “This is textbook tiny-handed trickery from Donald Trump,” Kraemer told Vocativ. “Of course he never actually made cement handprints because the weight of the wet cement would have certainly crushed his weak, pathetic mouse fingers. The truly sad thing is that he thought any of us would be deceived by his miniature-ham-fisted pantomime.”

Villarreal collided with Trump’s orbit during the 2012 presidential election cycle. Trump had recently said that he was seriously considering a run for president. During a routine visit at the Chicago Tower, the employees all surprised him with a mock campaign event. “We thought it would be a nice little thing to show that his employees support his run for president,” Villarreal said. “All the employees were rallying for him with Trump signs and he gave a little speech.”