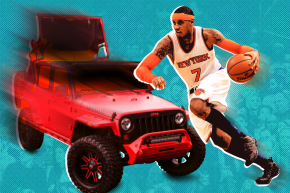 Inside The Wild World Of Making Custom Cars For Athletes 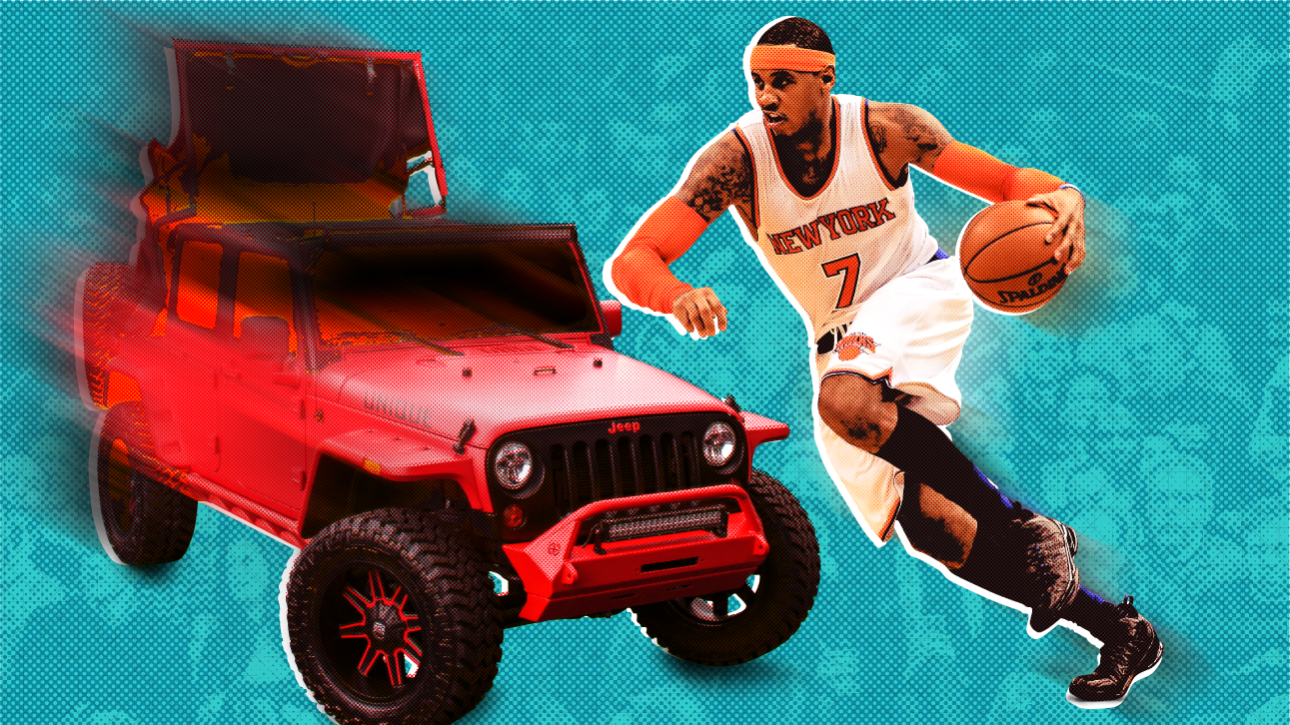 New York Knicks star Carmelo Anthony owned a burgundy Jeep Wrangler that his wife, the actress La La Vazquez and her friend Nadia, used to drive. The problem, according to car-customizing guru Will Castro, is that the vehicle “had ugly wheels and tires,” and Anthony had always wanted a fire-red Jeep.

Anthony asked Castro for help, as he has been since breaking into the NBA more than a dozen years ago. Castro, 50 and the proprietor of Team Unique autosports, has customized cars not only for Anthony but also for LeBron James, Diddy, Wyclef Jean, and Busta Rhymes.

Castro painted a red matte finish on Anthony’s Jeep and added a custom red power top that, with a push of a button, opens and closes with ease.

“Sure enough, when we brought the truck back with all the rough and rugged steel bumpers, wheels, tires, two-tone black and red, the interior black and red, all the pantones matching—La La’s not allowed to use the car anymore,” Castro said with a laugh. “That’s it, it’s over. [Anthony] told his wife, ‘Do not use the truck anymore.’ That came right from La La and Nadia’s mouth, ‘We can’t even use the truck no more.’”

“The car game is in a good place right now,” Castro said. “There’s different creativity out there.”

#Repost @ycespedes52 with @repostapp. ・・・ Thanks to my boy #AlexVega @theautofirm for making my cars the baddest in the @MLB. Killing it in Spring Training!!! #AvorzaMovement

“The Lamborghini was a great experience because I got to re-do the entire vehicle, but the Jeep, for sure, was the funnest because he let me do it the way I wanted to do it,” said the man who customized all six vehicles, Alex Vega, of the Miami-area Auto Firm.

“We re-did the whole body on it. We put new side body, we put new bumpers, new grills, new hood. The wheels I custom-made for him—I make my own wheels. I got to paint them red, and you normally don’t see a Jeep with red wheels like that.

“And, of course, the interior: he had the idea he wanted something to look like a glove theme, so that’s how we had the idea to do the glove stitching on it.”

More Is Drake A Sports Team Killer? An Investigation

The ostentatious designs drew plenty of camera shutters, Instagram posts, and web-gallery clicks—and also raised eyebrows. After Cespedes capped his week by riding in on a horse—Vega joked that he should have pimped the saddle—Mets manager Terry Collins nixed the hijinks, telling his players, “Fun time’s over. It’s time to get ready for baseball.”

Nevertheless, Vega heard rumblings that Boston Red Sox players would stage their own car parade this week. Others in the car business weren’t so keen either. When asked about Cespedes’ rides, Castro said, “No comment on that.”

But Castro then decided to comment and offered this: “I will say that he has three different colors in the [Jeep]. Look at that interior, that burgundy interior with red wheels, white paint. I don’t know if all the colors match, do they?” Castro walked to the open door of a Jeep he designed and said, “Look at our color palettes—they match.”

LeBron James in one of his custom rides.

As a younger man, Castro worked at Mario’s Restaurant on Long Island. “I wasn’t a good bus boy,” he said. “I was serving too big a cake or dropping the cups. They asked, ‘Can you drive cars?’”

He became a valet, working mostly weekday shifts, and still remembers the name of his co-worker who took all the big-money weekend shifts (Gerard). Still, Castro worked enough business lunches to park expensive cars of the moneyed elite, industriously offering to wash and wax their cars on off-days. That side venture became Willy’s Shape and Shine, based at his mother’s house.

That slowly grew into car customization. His big break came through his brother, who was a high school friend of Erick Sermon, the rapper and producer who was part of EPMD. Sermon asked Castro to customize his Mercedes with a rag top, spoiler kit, rims, tires, and sound system prior to a big performance at the Apollo Theater.

Outside the show, the car caused a sidewalk stir with LL Cool J among the gawkers.

“We crushed it,” Castro said.

A little while later, a local body shop referred Castro a job it needed help with—that customer proved to be New York Jets Pro Bowl safety Erik McMillan, who’d introduce Castro to his teammates and start his word-of-mouth marketing. That was about 20 years ago.

“It’s really 360—everything comes back around,” Castro said of trends. “What’s changed is, bigger doesn’t mean better anymore. Experience means better. There’s a fine line of going after the top. That’s one thing we stay away from. We want it to be classy.”

Let's just say we ended last night with a BANG… Avorza Lamborghini Aventador… Yoenis Cespedes of the Detroit Tigers… This #AvorzaMovement is on fire!!!!!

Vega, 41, caught the bug watching his father work for Firestone tires (and later joining him), and television, where he’d see the slick rides in Dukes of Hazzard, Starsky and Hutch, Knight Rider, and The A-Team. One day, then Braves outfielder Andruw Jones brought in a Bentley convertible, for which Vega did a full body kit, new wheels, and plenty of interior work. That led to referral after referral after referral: he now serves more than 380 athletes.

“Honestly, I’ve worked on everything I could possibly want,” Vega said. “But if somebody drove in here with the original Dukes of Hazzard car, I might pass out.”

(That General Lee, incidentally, has already undergone some customization as its owner, PGA golfer Bubba Watson, pledged to paint over the original Confederate flag on the top with an American flag.)

Castro offered one other “no comment” when asked about donking, which is the practice of putting older, large American sedans on absurdly oversized wheels.

Tommy Phillips of San Jose’s California Wheels has been outfitting cars for athletes for years—for Golden State Warriors star Stephen Curry, he put on custom wheels, tinted windows, smoked-out lights, and embroidered headrest logos in his Mercedes G-Wagen—and said the strangest request he ever received was the paint job of the car Oakland Raiders running back Darren McFadden wanted donked.

“We did a car made to look kind of like the colors of Barney with 32-inch wheels and tires on it,” Phillips said.

When Vega was asked to name the strangest request he received, he quipped, “I think I get those every day,” and couldn’t settle on just one.

He added pink lucite lights and a vibrating bed.

Castro stands next to his latest creation, a tank-ified Jeep with a custom gun-metal gray, chip-proof, line-x paint job with popcorn-ceiling texture. He used a gray-black two-tone palette on the interior leather with “Unique Special Edition” embossed in the seats—“No thread, just like a Ferrari,” Castro noted—for this Wrangler made specifically for this East Hills dealership on Long Island.

“You don’t need to spend superstar money to get a Unique Special Edition,” he said. “We want it to be affordable, but they get to drive like a star.”

Castro said custom packages can go for $5,000 on the low end; the entire business, after all, is based on disposable income being put toward extravagant comforts.

The most common requests from customers around the country are the tires and rims, said Phillips and Vega. “Everything starts with the wheels,” Vega said. Also, Phillips added, “Car wrapping is very popular right now”—some cars have been in for more than one color change.

Castro had a broader take on that question, saying, “They want to make it personalized, make it unique.”

Some day, he’d love to try a build-from-nothing car for himself.

“My own personal creation, starting from scratch, if I had time,” Castro said. “It’s like a shoemaker—he never has good shoes because he’s working on everybody else’s shoes.”

For now, Castro remains a car cobbler to the stars.