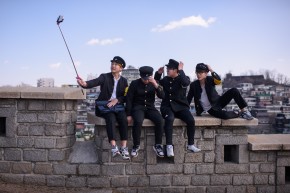 Man Kills Self While Taking Selfie With Gun
By Cassie Murdoch

Man Kills Self While Taking Selfie With Gun

Guns and selfies just don’t mix. That’s a lesson a 43-year-old Washington man learned the hard way. He and his girlfriend were apparently posing for photos with what he thought was an unloaded gun—but then the gun went off, shooting him in the face and killing him. He joins the ranks of an increasingly large number of people who’ve died while taking selfies.

A Vocativ analysis found that since 2014, at least 52 people have died in selfie-related accidents. None of the incidents were caused by phones or selfie sticks themselves, but rather happened when people put themselves in dangerous spots to get a cool photo or got distracted by their phones. Men are far more likely to die in the name of a selfie than women. Somewhat surprisingly (or reassuringly?), only three deaths—including this most recent incident—involved guns. Drowning actually accounted for the largest number of deaths, followed closely by falling from a great height (presumably while trying to capture a gorgeous view).

Getting hit by trains or electrocuted on train tracks while snapping a selfie are also big killers, thanks to their daredevil allure. A few people were killed while posing in front of oncoming trains, while others died while posing on top of trains. There have also been several selfie-related car wrecks, a goring during the running of the bulls (not a great time to stop and snap a pic!), and even a small plane crash caused by the pilot taking photos. Perhaps the oddest cautionary tale is the pair of Russian men who were killed while taking a picture with a grenade and it went off. Oops.

This really should go without saying, but apparently it needs to be said: It’s important to put safety above your desire to rack up likes on social media. Many of the individuals in these awful accidents brought it on themselves—take, for instance, the Russian teenager who fell to his death as he tried to take a selfie while hanging off the roof of a nine-story building. But there’s one incident with a truly innocent victim of selfie culture: the poor rare dolphin who died after it was pulled out of the sea in Argentina by a crowd eager to take selfies with it.