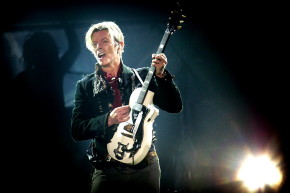 David Bowie’s final album, Blackstar, has been turned into an “Instagram-mini-series,” amounts to a visual interpretation of the critically-acclaimed release, spread out over 16 bite-sized episodes. Friday marked the premiere of the first episode.

The series is called “Unbound,” and its creators revealed that Bowie himself had a hand in its existence, giving them access to the album to work with it however they wished. From the announcement:

In the Fall of 2015, David Bowie gave us unique pre-release access to the music from ★ (pronounced ‘Blackstar’), his 28th studio album, allowing us to create our own visual interpretations of his songs, with no limits or preconditions on his part. Completed in December 2015, UNBOUND: A★InstaMiniSeries takes the audience on a journey of evocative images inspired by the moods suggested in the album’s music, lyrics and artwork. Each episode of the series is sure to capture the imaginations of all who experience it and will undoubtedly lead to endless speculation and discussion of meaning, metaphor and intention.