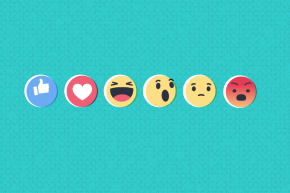 There's so much that can go wrong here

Facebook has added a whole set of new reactions that you can use in addition to the “Like” button. The Reactions include “Like,” “Love,” “Haha,” “Wow,” “Sad,” or “Angry,” and they have a cute little icon to go along with them, and Facebook is asking human beings to iterate along with its product to express a wider range of emotions online. In emoji form, no less.

Facebook says in its announcement that has been carefully studying the ways people want to be able to react on Facebook. It has closely studied people to understand what feelings them feel and reduced them to six categories. After a year of research, Facebook is introducing Reactions as a way people might be more open with emotions online, but because social media is not always the most sincere environment, it could end up having the opposite effect.

What could go wrong with a few emoji that used to signify happiness or sadness? A whole lot. Say a friend posts a long, impassioned eulogy for his therapy ferret, who died of old age just last week. But you hate ferrets and think they’re gross, and feel safe at night knowing that your city has an all-out ban on ferret ownership. Now that Facebook lets you express more emotion, you don’t just like this post. You love it. So you press the heart and you cause a large rift between you and your ferret-loving friend.

Or maybe one of your bros gets engaged and posts about it on Facebook. He was your wingman, and now you know those days are over. You’re the last one standing, dog. But you’re pissed about it, even in a non-serious sense, so you hit sad, to show that you’re mourning the loss of your partner in crime. He might get that you’re joking. His fiancée is not. Problems ensue.

On a more serious note, say a friend takes to Facebook to announce that his grandpa died. Death is one of those funny things that some people deal with differently, and others don’t always know how to react to. Some people use humor, while others are more rigid and serious. But it doesn’t exactly fit into six specific icon-based categories. So any reaction used on a post like this, could be completely misinterpreted and seen as insensitive. These are probably not the times to use Reactions.

Then there’s the LOL post. Oh, how the LOL post can go wrong! There are a number of examples, serious and not-so-serious, where it could. Say you’ve got a gun-loving Facebook friend who posts about how a certain politician is trying to take away their guns and how it’s a threat to their freedom and the very fabric of this country, dadgumit! It makes you laugh, in an ironic way, not in a strictly funny way, and so you post the crying-eyes LOL icon, and you immediately find yourself embroiled in a never-ending Facebook thread about Second Amendment rights. That’s not fun for anyone. Or maybe you use LOL to react to someone’s plight that seems funny to you, but is not funny to the person who put up the post. The LOL be be deployed in a way that pokes fun at people, but it leaves a lot of opportunity for misinterpretation.

As do the rest of the Reactions. When you limit people to six, easily quantifiable, heavily researched emotions, you leave a lot of room for things to go awry. People emote in many, many more ways than that. But Facebook is not a reflection of real life. It’s not to say you shouldn’t troll people, because you absolutely should troll people. Just do so with caution.