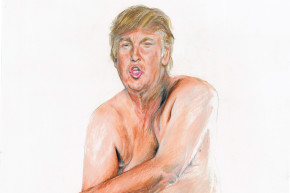 Great Moments In Art: Donald Trump With A Micropenis
By Sam Roudman

Great Moments In Art: Donald Trump With A Micropenis

Who Knew The Donald Could Be A Vehicle For 'Radical Body Acceptance'?

UPDATE: After a threat of legal action from Donald Trump, Illma Gore is auctioning her wonderful piece of art on Ebay. The auction site states that a portion of the auction sale will go towards Safe Place For Youth, an organization that helps homeless youth.

The portrait begins with his telltale wave of golden brown hair, flowing down to his generously narrowed cranium; to his pinched eyes with their too smooth bags; and that air sucking mouth with its pursed lips flaring mid-invective. His arms cross confidently over his right leg propped up on a stand out of sight. His hammy shoulders give way to a mass of protruding gut, whose solidness compensates for the sagging chest of the 70 year old, which stays hidden behind one of those confident arms. Below that gut is a shaded pubic darkness, where a downtrodden button of flesh seems to turn his little back on his host, in a futile attempt to escape. This is Donald Trump’s micropenis, drawn with great care.

“I did spend a ridiculous amount of time that I’m ashamed of on the actual genital area,” says Illma Gore, a 23-year-old Los Angeles based artist, with a knowing laugh. “It’s supposed to be a self portrait…I modeled for the body myself. ”Gore says she spent 40 hours over the last month painting her nude Donald Trump portrait “Make America Great Again.” And in the near 48 hours since she posted it on Reddit, she’s watched the public explode in reaction to it.

“Someone said it’s interesting to see someone strip down and see that we’re all just humans, it doesn’t matter,” she says, defining one end of the response spectrum to her work. “And then you have the adverse which is ‘this is sexual harassment! Blah blah blah.’”

Beyond the rabble, “Let’s Make America Great Again” is an enthralling, controversial, funny and surprisingly humane piece of 2016 political art, and a welcome addition to the shallow-pool genre that is presidential n00dz. The portrait can easily be read as a troll on Trump, because, big man with a teeny penis! But according to Gore, that’s not her only intent. “How can I say this without sounding completely douchey? I don’t think masculinity should be rooted in oppressing femininity any more.” The piece is meant “to pose a question on why we put so much significance on how big your genitals are.”

The confidence Trump exudes in spite of his mini-man, or better, without reference to it, is meant as a message of radical body acceptance. Looking at the painting as only “Haha big man with a teeny dick,” is participating in the very thing Gore is criticizing (that does not mean that is not a funny way to view and enjoy this majestic work, just an incomplete one). The painting both plays into and rides against the well-developed critique of Trump as a sad old man in a withering body whose every chortle and insult is a weak stroke against the grim, ceaseless tide of time.

This also might just be overthinking. “I thought it would be interesting to paint a micropenis onto this prolific figure,” says Gore, as aghast at the racist insanity of the Trump campaign as anyone.

In terms of election art, presidential nudes are a pointed kinda gross antidote to Shepherd Fairey’s faux-propaganda that is actual propaganda, or Sabo’s sometimes funny, generally misguided right wing insurrections. They’re unlikely to be co-opted by anyone’s campaign, and supremely likely to piss someone off.

While they might not all be presidential candidates, Gore plans to continue in the same vein. “Donald was the first of a couple of leaders I plan on painting to highlight that genitals don’t mean much,” she wrote in a follow-up email. “It’s what’s inside that counts, it’s not the peel, its the ‘nana.”