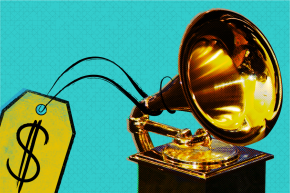 Trying To Sell A Grammy? Good Luck
By Tracy Moore 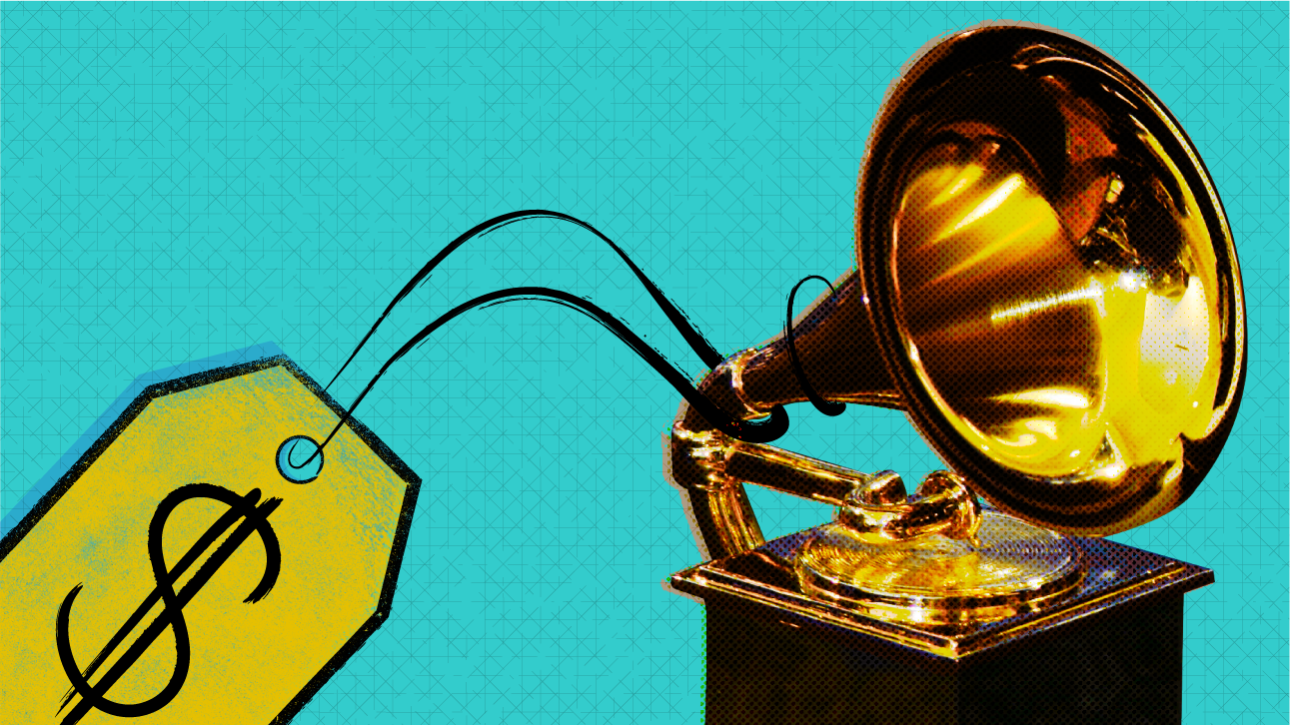 The Grammy award, given to hundreds of outstanding music industry players every year since 1958, is worth a lot in industry cred. Forbes once documented that the gramophone statuette comes with a monetary bounce of at least 55 percent in increased ticket sales, producer fees, and general earnings for winners. But how much is the award itself actually worth—if you tried to sell it on the open market?

We can start with the materials themselves. The Grammy is comprised of a custom metal alloy that its maker, sculptor John Billings, calls “Grammium.” Hand poured by Billings in his workshop in Ridgway, Co., the statuette’s alloy is widely reported to be a six-pound hunk of gold-plated zinc alloy.

With zinc going for about 80 cents a pound these days, and the 15 or 20 hours of labor, one award probably costs about $15 to make, estimates Desmond Barlow, an engineer die-casting company Cast-Rite in Gardena, CA. But, he says there are a lot of additional manufacturing costs to consider. Given the relatively low number of statuettes needed annually–it’s in the hundreds, but small for large-scale manufacturing.

Billings didn’t want to reveal his per unit cost, but he confirms that the award is gold-plated zinc alloy. “Certainly they ask a lot more money than they’re worth,” Billings explains by phone as he prepped to leave for his annual trip to the Grammys. “People do try to sell them from time to time. I know one of Johnny Cash’s Grammys went for $187,000.”

That seems to be the most anyone’s ever paid for a Grammy, but it was under unusual circumstances. Cash died in 2003, and the following year, he and June Carter Cash’s estate went to auction at Sotheby’s, where Cash’s 1986 Grammy for “Best Spoken Word or Non-Musical Recording,”—a 1985 interview recording of artists including Cash, Roy Orbison, and Carl Perkins—was the highest-selling item, going for $187,000.

But sometimes they go for a lot less. Pearl Jam’s Grammy for “Best Hard Rock Performance” of 1995 for track “Spin the Black Circle” sold for $52,000 at auction in 2014. And sometimes they go for a lot, lot less. An episode of “Pawn Stars” from 2010 features a lawyer attempting to sell the 1970 Grammy for best R&B song, “Patches,” written by Ronald Dunbar and General Johnson. It reached #4 on the Billboard charts that year. The lawyer selling it said he’d been given the Grammy in 1986 in exchange for legal services by a client who couldn’t pay. On the show, the lawyer tries to sell it for $15,000, but the pawn shop guy Rick says the asking price is too high, considering it’s a songwriter Grammy, and not a performer Grammy. Still, he wants it.

But in an interesting twist, Dunbar apparently caught wind of the episode and sued to stop the pawn shop from selling it. In a post at Mint Life looking at which major award pays the most at a pawn shop, Mary Hiers reports that Dunbar eventually “claimed legal ownership of the Grammy, got a court to forbid the Pawn Star people from re-selling it, and won his prize back.”

The Dunbar case sheds light on what may be a little-known fact of the award: It’s actually not for sale, and is an issue that pops up from time to time. When Dave Burgess, guitarist in the band Champs, won the award in 1959 for the song “Tequila,” tried to auction his because of financial problems due to a pile of medical bills, the National Academy of Recording Arts and Sciences (NARAS) immediately made its presence felt, letting him know they were opposed to the sale. Burgess claimed he hadn’t signed any agreement not to sell it in the first place, and the New York Daily News claimed the agreement signing was a more recent requirement, though the Academy doesn’t reveal when it began. The “Tequila” Grammy appears to have sold by auction in April of 2015 for $30,000.

This issue came up again in 2011 when singer Toni Braxton filed for bankruptcy and NARAS stepped in, concerned that creditors would seize her six Grammys and sell them. According to the Wall Street Journal, Braxton struck a deal in the bankruptcy agreement that allowed her to keep her awards, among others, but NARAS ensured that the awards would remain nontransferable in the event of seizure.

Jerry Sharell, publicist for NARAS confirmed that yes, like Oscars and Emmys, the awards themselves are “legally owned by the organization” and that the artist only has the right of possession. The verbiage in that agreement explicitly states that by accepting the award, you agree that it is “for your own personal, noncommercial purposes” and that “sale, auction, public exhibition, reproduction or other public or commercial exploitation of the Statuette,” without permission from the Academy, is prohibited. Bonus: They can take it back at any time.

Billings says the Grammy has a network of lawyers watching for their sale at auctions on eBay, in private sales, and the like to get on it when people try to turn a profit. That’s when he is often involved, he says, because he’s the only person who can authenticate the many fake Grammys that have circulated over the years. He keeps a folder of pictures of all the fakes, which he says are numerous. Luckily, Grammys come with a serial number, but he says NARAS’ de facto task force also uses some “pretty cool forensic” methods to root out the fakes.

That doesn’t stop people from trying to etch those numbers off or sell them through other means, however. Billings says often, people find them in storage lockers they purchase. “Sometimes, they will for example, find a Grammy that was presented to a engineer on a non-descript album, and they’ll kick it over to a jeweler and put Rolling Stones on it to make it more valuable. So that’s where I come in on authenticating them.” He says the changes over the years are so subtle and so numerous that it’s very sophisticated work to fake them.

As for why some sales get through while others are stopped, Billings couldn’t say for sure and Sharell didn’t comment, but Billings says he suspects it’s case by case, and that the reason the Johnny Cash sale went through may have been that Cash set it up that way before he died as part of how his estate would be handled.

Given how difficult it is to sell the awards, then, anyone looking to try is likely to be disappointed. The value, Billings says, is far beyond the metal anyway. “A lot of people are disappointed when they find that out the award is [plated in] 24 karat, and not solid gold,” he says. “But, come on.” Given all that hassle, it seems like if you want a Grammy, better to try your luck actually winning one. Or you could always buy a fake. Here’s a replica for only $299.