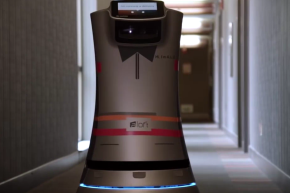 They're called Relay, and they're making ordering extra towels a lot more futuristic

Imagine you’ve just checked in to your hotel after a long day on the road. You call down to get some dinner. There’s a knock on the door and in comes a robot named Relay with your food.

That’s right, what would have once been something you’d only see on “The Jetsons” is now becoming a reality: hotels are starting to use robots to make room deliveries.

Whenever a guest calls the front desk for an item, a hotel employee puts the item into the robot and sends it to the guest. Using wi-fi and 3D cameras, Relay then maneuvers through the hallways to find the designated room the guest ordered from. These autonomous robots have already completed 13,000 deliveries this way.

The creator behind Relay is Savioke, a tech company focused on creating autonomous robots for the service industry. Twelve hotels already use these robots (around Silicon Valley, obviously) and Savioke plans to extend their use to other places, such as elderly care facilities and hospitals.

Savioke reports that some hotel guests have ordered items just to see Relay deliver them, and who can blame them? With a robot attending to your needs, ordering extra towels has never been less boring.

No word on whether or not they expect a tip.