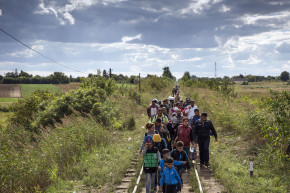 After The Journey: A Syrian Refugee’s Struggle To Build A New Life
By Shane Dixon Kavanaugh

After The Journey: A Syrian Refugee’s Struggle To Build A New Life

Syrian refugee Maziad Aloush, whose perilous trek from Turkey to Europe was documented by Vocativ last year, has found new hopes, frustrations during his months in Germany 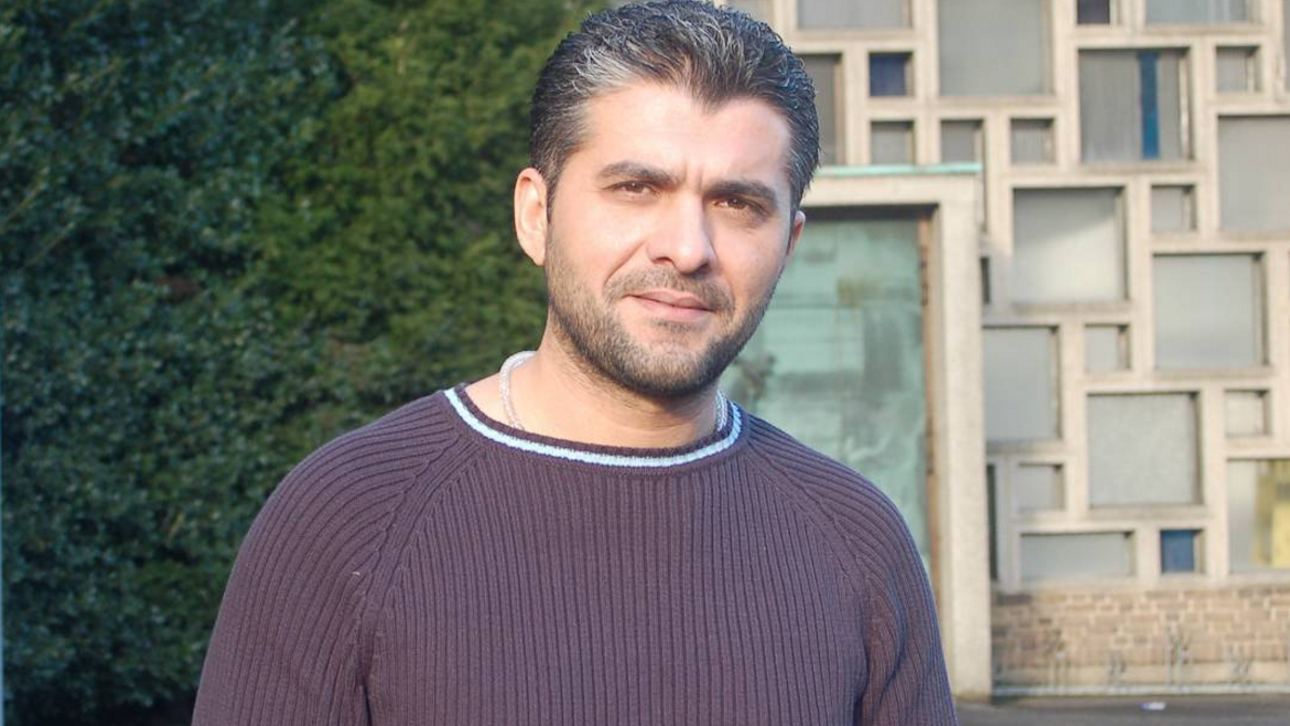 Maziad Aloush was recently stopped for being a Syrian refugee in Germany. It happened late last month, during a carnival party at St. Barbara’s church in Marl, the mining town that he has called home since September.

Dressed as a bandit for the celebration, Aloush was standing outside the church when he noticed a woman from the party staring at him cautiously. She approached him slowly, looking him up and down. Aloush didn’t know what to expect, he recalled in a recent interview with Vocativ.

Eventually, the woman opened her mouth and asked: “Aren’t you the one who writes for Marler Zeitung?'” referring to Marl’s daily newspaper.

Aloush breathed a sigh of relief. Yes. He was. “She then asked me how to say ‘cheers’ in Arabic,” Aloush said.

The next day, he published an account of the encounter on the paper’s website, where, for the last eight weeks, he has written columns about his life in Germany. The foray into journalism, which was unintended, has made the former school teacher a conspicuous figure in Marl, a low-key community in the western part of the country. And it marks just the latest twist in a curious—and sometimes arduous—journey that began when Aloush, 31, fled the civil war in Syria and set off for Europe from Turkey with his two younger brothers, Mohammad, 20, and Ayham, 16.

Over the summer, the three siblings embarked on a perilous 2,100 mile-trek that took them across the Mediterranean Sea and through the forests and mountains of five countries. During their voyage, which Vocativ followed in August and September, Aloush and his brothers were smuggled in boats and private cars, hopped trains and buses and often walked miles on empty stomachs before sleeping under the stars. After 15 days, they arrived in Germany uncertain about the future.

Since arriving in Marl at the end of September, Aloush has been relatively lucky. He’s found friends and a place to live. He has a shot at starting at a German university next fall. But much of his life remains in limbo. After five months, he still doesn’t have official asylum status. Meanwhile, Syria’s war keeps him homesick and fearful for his family there.

“Normally home consists of two parts,” he said. “You have your place, and you have your people. I am still missing my people.”

Aloush has started to assemble the semblance of a regular life in Marl, though. When they first arrived, he and his brothers stayed in the cramped quarters of a school converted into a refugee camp that slept six to a room. That changed following a chance encounter Aloush had with Ulrich Müller, the pastor of a local church.

He and the pastor had met during a social function hosted by the Catholic parish, which provides social services to some of the recent immigrants. The two spoke at length and hit it off, Aloush, who is Muslim, said. The night ended with Müller offering Aloush a small house owned by the parish, free of charge.

More How A School Stabbing Became An Anti-Immigrant Rallying Cry

Overnight, he had a place to call his own, albeit one that needed some work. The bathroom and kitchen were both in disrepair, so Aloush and his brother Mohammad fixed them. Later, he installed cabinets and replaced a few aging light fixtures to give the brick interior a cozier feel.

But there were things about the house that Aloush wouldn’t be able to fix. It didn’t have the smell of his mother’s cooking. It wasn’t filled by the sounds of his father and his four other siblings.

At times, the parish house felt even more empty because Aloush’s youngest brother, Ayham, did not move in with him and Mohammad. Instead, after some discussion, the three decided that it would be better for Ayham to live in a nearby group home designed for refugees under 18. It was not an easy decision for the siblings to make, even though Aloush sees Ayham several times a week, he said.

“In Syria it’s normal to be near your family whenever possible,” he said.

Luckily, Aloush, outgoing and talkative, has found a handful of Germans that help fill that familial role. He calls his neighbors Jost and Heike Riediger his “onkel” and “tante,” the German words for uncle and aunt. Another friend, Dennis Matissik, is Aloush’s “godfather.” To emphasize that point, Aloush recently programmed his phone to play the theme song to “The Godfather” when Matissik calls.

Thanks to these new friends, Aloush said, he’s been to hockey matches, barbecues and beer halls. He’s taken a liking to Altbier, a brown ale local to the region and especially big in nearby Düsseldorf. Recently, he tried venison for the first time, a taste he found more agreeable than other German foods.

Still, Aloush sometimes misses the lamb and okra dishes his mother made back home, he said. When out to eat, he still forgets to request non-carbonated water, and winds up with a glass full of bubbles, which he finds strange.

With Aloush’s application for asylum still pending, he sometimes struggles to fill his days. He cannot legally work or attend university. Aloush said that for a while he had volunteered at a school that tutored refugee teens, only to be told later by local officials that he couldn’t continue since his asylum status had yet to be approved.

“It’s not fair to have to wait all of these months,” he said, adding that he recently had an appointment with German officials to begin the process.

Aloush said he receives 290 euro a month from the German government—roughly $320 U.S.—as a living stipend. It’s a sum that covers little more than food and basic staples, he said. He spends several hours each day teaching himself German. Long walks along the Lippe river, which snakes through the northern part of town, have become a favored ritual for Aloush, especially when it rains.

“Normally, German people don’t like it when it’s wet,” he said. “They say, ‘We need sun.’ I tell them that I’ve had a lot of sun in my life. I feel happy when I see the rain.”

Those moments of contentment can be fleeting. Aloush, racked with anxiety and a feelings of helplessness, watches from afar as the situation in Syria gets ever worse. Fears about the safety of his parents and sisters, who now live in Hassakah, a city in the country’s northeast that has become a battleground between ISIS and Kurdish forces, consume him daily, he said. Deir Ezzor, where Aloush grew up, has been laid to waste by Russian and U.S. airstrikes, and Islamic State militants and government forces continue to fight for control of the city, which hasn’t had electricity since March.

Haunting photos began to surface last month that show besieged Deir Ezzor residents jaundiced, gaunt and starving to death. Aloush said he had no choice but to look at the morbid images. He said he felt a similar sense of heartbreak when he learned that the city’s Siyahseyah Bridge, an historic landmark, had been reduced to rubble in late 2014.

“When it came down I was one of many people who really cried,” Aloush said. “Every person in my town has a memory with this bridge.”

In slow, measured breaths, Aloush then recalled how he and his best friends used to spend their summer days crossing the pedestrian bridge, a suspension span built by the French in 1927. From there, they would scramble down to the banks of the Euphrates river to swim and stay cool.

“It was the most romantic place in our city,” he said.

Aloush wrote about the Siyahseyah Bridge and Deir Ezzor’s siege recently for Marler Zeitung. He has used his column, which appears both in print and online, to offer personal reflections on the Paris terror attacks as well as the alleged sexual assaults that took place in Cologne on New Year’s Eve, both of which have colored the conversation around Europe’s so-called migrant crisis.

“I thought that would be a lot better than us trying to explain his situation, and the situation of these refugees, to our readers,” Martina Möller, an editor with the publication, told Vocativ. She said she approached Aloush about writing a column after she interviewed him for a story.

More than 1.1 million asylum seekers entered Germany last year, according to officials. Syrians fleeing the civil war made up more than 40 percent. In the last year, Marl has accepted about 1,300 people that have fled from the Middle East or North Africa, Möller said. By and large, residents have welcomed these newcomers, she said. “This region knows how to cope with other countries,” said Möller. “This is one reason why they’re so open-hearted.”

She also believes that Aloush’s writing, at turns intimate and visceral, has resonated with readers. “People admire Maziad’s optimism, his positive-thinking,” Möller said.

Aloush admits that it’s not always easy for him. But he recognizes that he is more fortunate than many. “I am waiting here in safety,” he said. “My parents and sisters are waiting in danger. Every day in Syria is worse than the one before.”

He said that right now he’s feeling hopeful. Should he soon be granted asylum, he’ll able to enroll in a German university next fall to study mining engineering, which would allow him to pursue a career that wasn’t possible for him back home.

“It wasn’t my dream to be a teacher,” he said. “So maybe now I can make something different with my life here.”