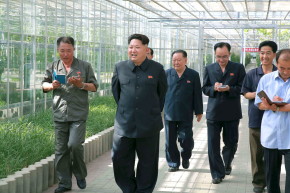 North Korea Claims It Has Cured Hangovers
By Joshua A. Krisch

Add that to the list of North Korea's "miracle cures" for AIDS, Ebola and cigarette addiction

North Korea’s state-controlled media is arguably the most entertaining news source on the internet. They’ve claimed North Korea has developed a vaccine for cancer and Ebola as well as a “super pill” that grants old men virility and young children super-strength. In the past, state-run magazines have announced the discovery of an authentic unicorn lair, and they have praised a plant-based solution to cigarette addiction. Now, the state-run Pyongyang Times claims that North Korea has discovered an alcoholic beverage that is hangover-proof.

“Koryo Liquor, which is made of six-year-old [ginseng], known as being highest in medicinal effect, and scorched rice, is highly appreciated by experts and lovers as it is suave and causes no hangover,” according to a excerpt obtained by the Guardian.

It’s obviously ridiculous—especially since hangover cures basically do not exist. As far as Western medicine knows, the only way to avoid a hangover is to avoid alcohol in the first place. But then, this wouldn’t be the first time North Korea has claimed its doctors know better. Here’s a brief history of the totalitarian regime’s impossible promises about its highly suspect medical miracles: