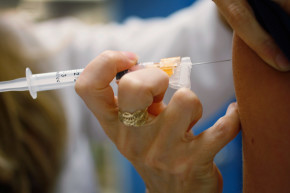 With Cancer On The Rise, Boys Need HPV Vaccines Too
By Joshua A. Krisch

With Cancer On The Rise, Boys Need HPV Vaccines Too

Obama called for a moonshot to stop cancer last week—but we already have a vaccine that prevents some forms of cancer. The trouble is getting people to use it.

Human papillomavirus, or HPV, is the main cause of cervical cancer and a prominent cause of throat cancer and anal cancer. A new study published in JAMA Otolaryngology Head and Neck Surgery even suggests that HPV is the culprit behind an entire class of mysterious head and neck cancers that claim lives every year. There are now vaccines that protect against certain strains of HPV, including some of the most common cancer-causing strains. Yet just 60 percent of young girls and only about 40 percent of young boys in the United States have been vaccinated against HPV, according to the Centers for Disease Control and Prevention.

More Proof The HPV Vaccine Does Not Lead To Riskier Sex

The FDA approved the first HPV vaccine back in 2006. Known by its brand name, Gardasil, the vaccine protects against four common strains of HPV, including two that are commonly associated with cervical cancer. Since Gardasil’s release, two other HPV vaccinations have been approved for use in the U.S. All of the vaccines protect against at least HPV 16 and 18, the two strains that have the greatest risk of causing cervical cancer. Although it is unclear how effective these vaccines are at preventing cancers outside of the cervix, prior studies estimate that Gardasil may prevent up to 80 percent of anal cancers and at least a handful of head and neck cancers.

It’s a miracle vaccine that can help prevent cervical cancer, genital cancers, head and neck cancers and, of course, genital warts. So the disparity between the number of boys and girls who get the vaccine is all the more shocking—as studies have shown that HPV is perfectly capable of killing both men and women, without prejudice. Here’s a breakdown of the disparity between male and female HPV vaccination rates in the US:

There are two glaring problems here. First of all, HPV vaccination rates are ridiculously low. Despite the loud minority of anti-vaccine parents who would have you believe otherwise, between 80 and 90 percent of children in the United States receive routine vaccines as scheduled. That puts numbers like 60 percent and 40 percent—the amount of girls and boys, respectively, who have been vaccinated against HPV—into startling perspective.

And it’s not like there’s any reason to opt out. Some conservative, religious parents initially objected to the vaccine on moral grounds, arguing that it would give license to preteens to engage in risky sex. Leaving alone the confusing notion that it would be better for teens to die from cancer than have sex, one major study recently found that girls who received the HPV vaccine did not have higher rates of STIs, nor were they more promiscuous than their peers. “This is one of the few medications ever developed that can actually prevent cancer,” Anupam Jena, a professor of health care policy at Harvard Medical School, said at the time. “It’s good to be able to reassure parents, physicians and policymakers that the vaccine does not promote unsafe sexual practices.”

But then, even when girls get their vaccines, boys don’t. 40 percent is astonishingly low compliance, even for a controversial vaccine. That may be because HPV was initially marketed as a way of preventing cervical cancer and, of course, boys don’t have cervixes (at least not cis ones). But with new studies showing that at least some strains of HPV are undeniably linked to a slew of head and neck cancers, it is becoming even more important for parents to vaccinate their boys—and do whatever possible to save them, too, from the death and disfigurement associated with those cancers.

“Every year, over 9,000 males are affected by cancers caused by HPV infections that don’t go away,” the CDC writes. “In fact, if current trends continue, the annual number of cancers of the mouth/throat attributed to HPV is expected to surpass the annual number of cervical cancers by 2020.”