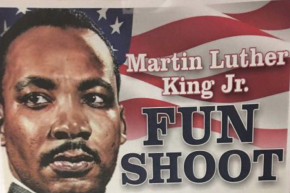 "It was an honest mistake," Air Force officials say. The internet has not been quite so forgiving of the MLK gun gaffe

An Air Force base in Georgia is under fire after it used an image of slain civil rights leader Martin Luther King Jr. to promote a gun shoot.

Members of the Robins Air Force Base put out posters bearing the Nobel Peace Prize winner’s image for a $20 “fun shoot” at a local skeet range on the holiday that celebrates his birth. The decision to use King’s picture turned out to not be such a great idea, Air Force officials admitted, though apparently only after a reporter from the Atlanta Journal-Constitution asked them about the flyer. Officials later pulled the provocative poster.

“We’re deeply sorry for any offense or harm caused by our insensitivity and failure to provide appropriate oversight of our marketing process,” Robins spokesman Roland Leach told the Air Force Times in a statement. “There was no malice of forethought in the flyer’s creation and it was never the base’s intention to portray Dr. Martin Luther King Jr. in a negative light,”

Leach added: “It was an honest mistake.”

People on Twitter were a little less forgiving of the MLK-inspired blunder.

@bluestein @deray wow. No one can be THAT STUPID.

@bluestein Honest mistake,my ass. More like deliberate and then play dumb when called on it.

@bluestein @deray DISGUSTING!!!! If ANYONE in the history of this "United States" deserves our ultimate #respect it is #MLKJr

@bluestein @thepoliticalcat Thank you for not letting this horrific lapse in judgement go unnoticed.

Rutha Jackson, president of the NAACAP in Houston County, which is home to the Air Force base, told the Macon Telegraph that the was “like a piece of hate mail” to her.

Not everyone was quite as furious about the admitted gaffe.

“This is exactly the kind of things Donald Trump is talking about,” wrote on commenter on the Journal-Constitution’s website. “PC-oriented silly-A bullcrap!  It’s why he has such a huge following who are as angry as he is.  That’s why he will be the next President of this country. People are sick and tired of it.”

Another added: “Much ado about nothing…”