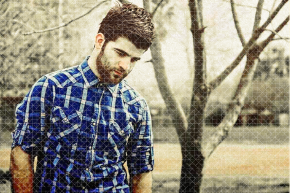 Mohammed Younis Al-Jayab, an Iraqi-born refugee living in the U.S., allegedly traveled from Chicago to Syria to fight for an ISIS-affiliated terror group

An Iraqi-born refugee facing terrorism charges in the U.S. after allegedly traveling from Chicago to Syria to join terror group affiliated with ISIS loved fitted flannel shirts and fast cars as much as fighting overseas, according to a Facebook account uncovered by Vocativ.

Mohammed Younis Al-Jayab looks more hipster than jihadi in over a dozen photos showing off his sculpted hair and styled beard on the Facebook profile discovered by Vocativ using our deep web technology. Often wearing designer sunglasses, the brawny 23-year-old reveals a penchant for posing. In his profile picture, al-Jayab stands in front of the Golden Gate Bridge, looking away from the camera while clad in skinny jeans and a white Ralph Lauren dress shirt. His mittened hand clutches a jacket draped over his shoulder.

Friends of al-Jayab later the pictures were his to a Fox News affiliate in Sacramento.

On his Facebook page, the suspect supports the critics of Donald Trump’s plan to ban foreign Muslims from entering the country. Al-Jayab was one of thousands who shared a Facebook post from Michael Moore in December that showed the filmmaker standing outside a New York City Trump Tower with a sign reading: “We Are All Muslim.”

Moore sharply criticized Trump after the billionaire announced his controversial proposed ban following the deadly, ISIS-inspired rampage in San Bernardino, California last month. A married couple who’d declared loyalty to the terror group shot and killed 14 people. One of the suspects behind the massacre, Tashfeen Malik, was able to receive a U.S. visa, which critics now say was hastily approved.

Since then, Americans are debating whether U.S. officials are doing enough to vet and monitor refugees who immigrate from countries rife with terror groups. Al-Jayab’s arrest, along with another refugee in a separate case announced Thursday, provides a fresh round of fodder for those who claim would-be terrorists and others who pose a national security threat can enter the U.S. with relative ease.

Authorities allege that al-Jayab, who came to the U.S. as a refugee in 2012, left for Syria a year later to take up arms alongside Ansar al-Islam, an al-Qaeda affiliate that later merged with the Islamic State. The 23-year-old told immigration officials at the time that he’d traveled to Turkey to visit his sick grandmother, and denied he was a part of any rebel group or militia, according to a criminal complaint filed in U.S. court.

He returned to the U.S. in January 2014 and settled in Sacramento.

There are many fashionable photos on the al-Jayab-affiliated Facebook account, but few signs of an Islamist militant. He belonged to a Facebook group called “Syria in Our Heart,” as well as other groups centered around Iraqi Palestinians and Iraqi Palestinians in America. In 2013, he uploaded a post calling to send Arab leaders to hell, including Syrian President Bashar al-Assad. One of his last posts was a video welcoming his brother at the airport.

U.S. Attorney Benjamin Wagner of the Eastern District of California said in a statement Thursday that al-Jayab did not appear to be planning any acts of terror inside the U.S. “While he represented a potential safety threat, there is no indication that he planned any acts of terrorism in this country,” Wagner said.

In a separate case announced Thursday, federal officials in Texas revealed terrorism charges for another Iraqi-born Palestinian who entered the U.S. as a refugee. Omar Faraj Saeed al-Hardan of Houston is accused of attempting to provide material support to ISIS, making false statements to government officials and unlawfully applying for naturalization.

The grand jury indictment against the 24-year-old, unsealed Thursday, does not provide details about the evidence behind those allegations. Al-Hardan entered the U.S. as a refugee in November 2009 and was granted permanent residency in August 2011, officials said.