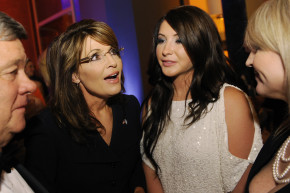 How The Latest Bristol Palin Birth Conspiracy Theory Got Started

Since Sarah Palin emerged from Alaska as John McCain’s running mate in 2008, there have been wild rumors about her and daughter Bristol’s reproduction. The original (widely discredited) rumor was that Sarah faked her 2008 pregnancy with son Trig to cover up for the fact that he was actually Bristol’s child. So it’s no surprise that when Bristol gave birth to daughter Sailor Grace on December 23, 2015, a number of obscure blogs cried fraud. The baby, they say, was actually born weeks earlier. How do rumors like this get started?

Patient zero for the conspiracy is Right Wing Crooks. The harebrained blog argues mostly based on evidence from Bristol’s Instagram account that baby Sailor was actually born November 4, 2015. The December birth date was staged, the author claims, to cover for the fact that the child was the result of a one-night stand the noted abstinence advocate had in Las Vegas during Valentine’s Day weekend.

The blog post says the timing is convenient. In March 2015, the elder Palin announced that her daughter was engaged to ex-Marine and Medal of Honor recipient Dakota Meyer. The betrothal was short-lived, however, and in May the engagement was called off. Bristol then announced that she was pregnant. Curiously enough, she would not name the father, although most assumed that it was Meyer. But Right Wing Crooks says the photos Bristol posted in Vegas back in February prove 1) that the engagement was a sham and 2) that Sailor Grace’s father is a random:

“Everyone who has analyzed these photos understands what happened: Bristol and Marina went out on the town in Vegas; picked up one or more Vegas lounge lizards; wound up in a hotel room engaging in sex; and, Bristol came out of the night pregnant by a guy she picked up in a bar and whom she does not know.”

The trip, our sleuth continues, is the key to the whole thing:

“Normal human gestation is 36 to 40 weeks. Thus, if Bristol were knocked up on 14 February, her baby would be due between 9 and 21 November.  Her engagement to Dakota was not announced until March, at which time she already was one month pregnant.  Sarah sought the ‘engagement’ to make the baby legitimate, as well as hooking her faded star to a real hero who, she hoped, would help invigorate her many failed ventures.”

And there’s more proof, says the Instagram detective. Just look at the hospital bracelet Bristol is wearing in the delivery room. With a little enhancing (and squinting and Photoshop), the date on the bracelet could maybe possibly say November 4.

Nothing fans the flames of a crazy conspiracy theory about fake births more than other equally reputable blogs picking up on it and adding their own kernels of evidence. Winning Democrats did its own independent photo analysis based off purported father Dakota Meyer’s Twitter photo of Bristol and baby to say that, yep, the bracelet says November 4.

Addicting Info notes that Sarah Palin’s Christmas Eve Facebook post about the birth of the child was posted from New Orleans, when the picture shows that Sarah and husband Todd are in a hospital in Alaska.

Idly Crave Online claims that Bristol changed the caption on a Vegas throwback Instagram post from “The night before the worst mistake of my life” to “#vegas”.

The slightly-more reputable blog ONTD latched on too, pointing out that there was a 48-hour Palin social media blackout around the time the baby was really born in early November. It also noted that the photo of Bristol’s son Tripp holding Sailor Grace on Christmas Eve had to have been taken weeks before, since Tripp was with his father for Christmas.

But nothing lends more credence to the conspiracy than the fact that Bristol actually responded. Per Entertainment Tonight:

“Admitted the night of 12/22/15 when they started my IV and then day of 12/23/15 had my baby girl!” Bristol told ET, along with photos of her in the hospital with mom Sarah and one of her sisters.

This rumor would not exist were it not for the—ahem—mother of all wild Palin tales: the 2008 rumor about Sarah’s fake pregnancy. It’s weirder when you think about that conspiracy in the context of the new one. Apparently the source of the original rumor came from some Palin emails during the McCain campaign. Which, of course a salacious rumor about Sarah Palin would come from Sarah Palin. With the Palins, the call is almost always coming from inside the house. Most of the media—with the exception of blogger Andrew Sullivan, who had some questions—ignored it as just a rumor at the time. The late writer Christopher Hitchens dredged the rumor up again in 2010 in a piece for the U.K. Spectator. The conspiracy popped up another time around 2011, when Brad Sharlott, a professor at Eastern Kentucky University, wrote an entire academic paper on the matter. It’s the one rumor about the family that just won’t quit, and it’s back in the news thanks to the birth of Sailor Grace.

At this point, it’s easy to forget that Sarah Palin is a politician, a governor whose bright young career culminated in a run at the vice presidency not too long ago. These days her name appears in the news far more often for her and her family’s personal life than for her policy ideas. It’s probably not what she had in mind when she accepted McCain’s offer to be his VP in 2008. And judging by the durability of Palin birther rumors, it’s also difficult to imagine things going back to how they were.