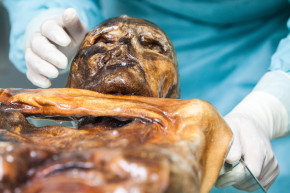 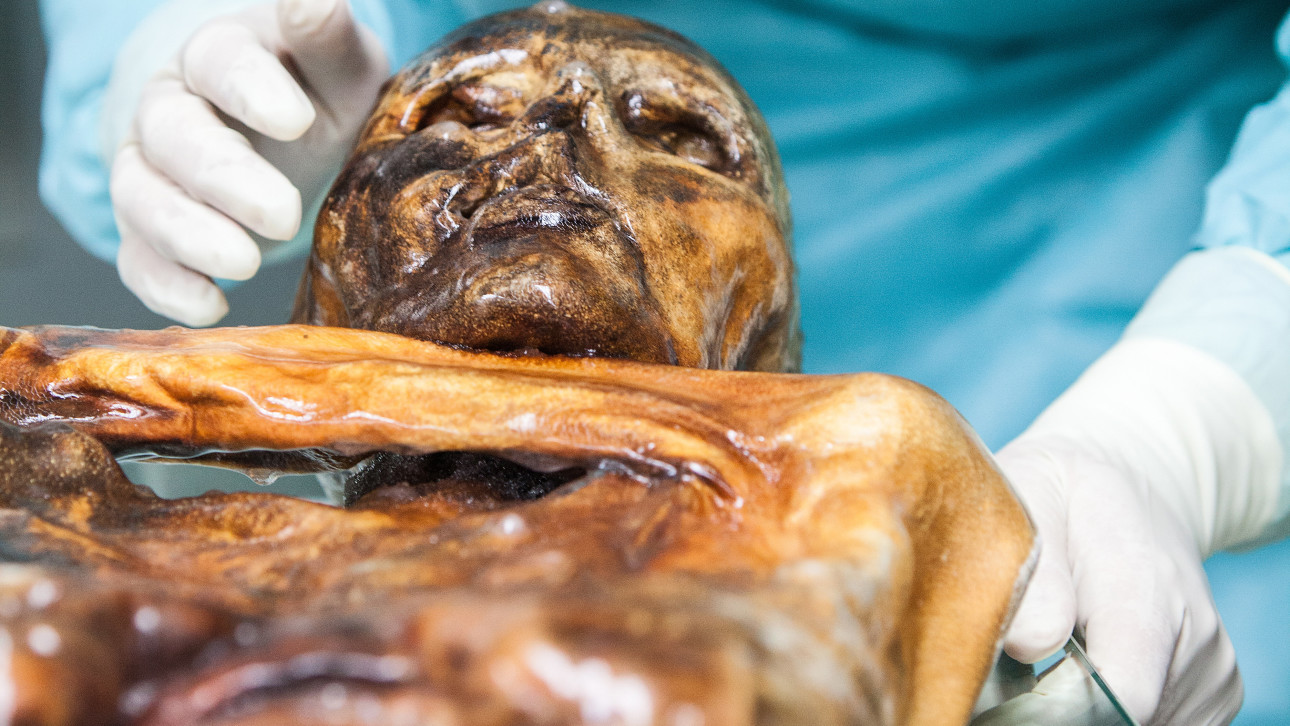 Ötzi the Iceman—a famous, naturally created mummy discovered in 1991—died around the year 3,300 B.C.E, likely clawing at the arrow embedded in his shoulder. Now, by investigating the mummy’s ancient stomach, scientists have discovered new clues about early man.

Since the Iceman’s mummified corpse was discovered, scientists have been scouring Ötzi’s remains to learn how the Iceman and other early humans lived. A new study published in the journal Science reveals that the Iceman was infected with Helicobacter pylori, a common gut bacteria that can occasionally cause stomach ulcers. And the particular form of bacteria he possessed offers important clues to how early humans migrated to Europe.

More Ancient Humans Were Up All Night To Get Lucky, Too

25 years after the Iceman was discovered, scientists are still teasing secrets out of Ötzi’s incredibly preserved corpse. Five years ago, scientists sequenced Ötzi’s entire genome and, in early 2015, finally finished deciphering the 61 tattoos carved into his petrified flesh. Over the years, we have learned that the Iceman likely had intestinal parasites, Lyme disease and dental cavities; we’ve learned that he was lactose intolerant and at high risk for heart disease.

And now, we know a bit about the bacteria that inhabited his stomach—his microbiome—too. The whole idea of investigating the Iceman’s stomach initially presented a problem for researchers, because there was barely a stomach left to speak of. “We thought it was extremely unlikely that we would find anything because Ötzi’s stomach mucosa is no longer there,” Albert Zink, PhD, paleopathologist with the European Academy and coauthor on the study, in a prepared statement..

But Frank Maixner, microbiologist with the European Academy and coauthor on the paper, had other ideas. “We were able to solve the problem once we hit upon the idea of extracting the entire DNA of the stomach contents,” Maixner said in a prepared statement. “We were able to tease out the individual Helicobacter sequences and reconstruct a 5,300 year old Helicobacter pylori genome.”

The real surprise, however, came when the researchers took a closer look at those H. pylori samples found in the Iceman’s stomach. “We had assumed that we would find the same strain of Helicobacter in Ötzi as is found in Europeans today,” said Thomas Rattei, computational biology at the University of Vienna and coauthor on the study, in a prepared statement. “It turned out to be a strain that is mainly observed in Central and South Asia today.”

That may not sound like big news, but discovering an Asian stomach bug in an early European human is not only unexpected, it’s a paradigm shift. The modern strain of H. pylori that infects Europeans is a hybrid between Asian and African bacteria. If we knew the circumstances under which that mixing first took place, we could theoretically reconstruct early human migrations—tracing the steps of the first Europeans by monitoring the evolution of their diseases. But until now, nobody could answer one, fundamental question: When and where did the Asian and African strains of bacteria (and, by extension, the humans carrying them) first meet?

“The ‘Iceman’ H. pylori is a nearly pure representative of the bacterial population of Asian origin that existed in Europe before hybridization,” the authors write. “Suggesting that the African population arrived in Europe within the past few thousand years.” In other words, since Ötzi was infected with Asian bacteria, this implies that African bacteria arrived only later, less than 5,000 years ago, and mixed to form the modern H. pylori that contemporary Europeans know and love.

It’s still unclear when exactly early humans from the other continents began to settle in Europe, but this represents a first step toward understanding how the Iceman’s ancestors and progeny migrated and interacted with other early humans. “The recombination of the two types of Helicobacter may have only occurred at some point after Ötzi’s era,” said Maixner.

“This shows that the history of settlements in Europe is much more complex than previously assumed.”