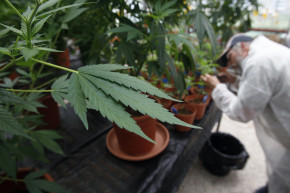 New York State has legalized medical marijuana, and the kosher industry is getting involved

Kosher marijuana is coming to New York. Vireo Health, one of five companies approved by New York State to sell and produce medical marijuana, has gotten its products certified by the Orthodox Union, one of the most prominent kosher certification agencies in the world, which has previously put its kosher certification stamps on everything from bottled water to antibiotics.

“Jewish law is very sensitive to people’s health and wellbeing in every way,” Rabbi Moshe Elefant, the COO of Orthodox Union’s kosher certification arm, says. “If marijuana can make somebody’s life better, then we want to be part of that.”

For observant Jews, the laws of keeping kosher, or “kashrut,” are especially sacred. The general guidelines (including not cooking a goat in its mother’s milk and avoiding pork and shellfish) are peppered throughout the books of Leviticus and Deuteronomy; many of the specifics were then handed down through a rich oral tradition. To oversimplify 3,000 years of back-and-forth: In the strictest interpretations of kosher law, only certain animals may be eaten and, of these animals, none may be mixed with dairy. Additionally, the slaughter and preparation of these animals must be overseen by trained rabbis. If something non-kosher slips into the mix, even minor contaminations can render an entire dish forbidden.

More Strategy: Where To Eat Your Jewish Christmas Dinner In NYC

It doesn’t stop at food—the same rules apply for anything that can be absorbed by the body. “‘Eating’ doesn’t only mean ‘eating,’ it means ‘ingesting,'” Elefant explains. Indeed, Elefant cites Talmudic opinions that even massage oils may require kosher certification, because the body technically absorbs them. As a nod to these stricter opinions, the Orthodox Union has certified vitamins, medications, topical creams and plenty of other items that are not exactly food. “It’s not black and white,” Elefant says. “But there are those who are careful about it, and want to make sure that even if they’re not putting something into their mouth, it’s kosher.”

When it comes to kosher marijuana, Elefant says, the main concern is contamination. “Marijuana is a plant that grows in the ground, which is essentially kosher,” Elefant says. “But, as you know, there are very few products that you buy that are as pure as when they came out of the ground. Therefore, people want to know if there are any [non-kosher] additives or extraction methods used in the manufacture of the product.”

But they also kept an eye out for another red flag. “The third thing we checked for is that it’s only being used for medical purposes,” Elefant says. “We won’t be certifying marijuana that’s for recreational purposes.”

The Orthodox Union has similarly refused to certify cigarettes and chewing tobacco—this has not, however, stopped many observant Jews from smoking cigarettes anyway.

Both of these positions, however, are less about kashrut and more about the spirit of the Jewish law. “We feel that you should not be using a product that, on every package, it says the surgeon general told you not to use it,” Elefant says. “Jewish law is very, very sensitive to health.” (On the subject of certifying other unhealthy foods, Elefant quipped, “If tomorrow they decided to put a health warning on every pastrami sandwich, we may not certify them either!”)

Even certifying medical marijuana was an uphill battle at the largely rightwing Orthodox Union. “When you think about marijuana, your natural feeling is that it’s something illegal, something we don’t recommend people partake of,” Elefant says. “That’s the natural feeling of rabbis, the people who sat around the table having that conversation.”

But before the proposal was trashed, Elefant says, phone calls started pouring in. “People were calling us—people with different pain issues. And they said marijuana was keeping them alive, because the pain would be excruciating without it,” he says. The final kicker came when New York State approved medical marijuana for select indications. “For something as controversial as marijuana, New York State certainly would have evaluated whether it was the right thing to do, and their opinion weighs heavily here,” he says.

Incidentally, that last assumption isn’t quite fair. The scientific evidence that medical marijuana is an effective treatment for most conditions is scant. Now, that’s largely because marijuana is still considered a Schedule I controlled substance, which means that conducting research on its effects is difficult and, in many cases, impossible. But the few studies that have surfaced have certainly not been promising. Papers have turned up nothing for marijuana’s purported effects on epilepsy, glaucoma and HIV/AIDS, and the literature on marijuana’s painkilling capabilities is shaky, when not downright junk science.

And now, New Yorkers can get these products certified kosher.