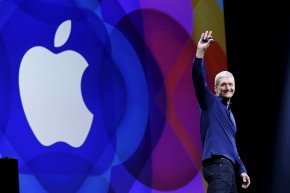 Does Apple Have A Leadership Diversity Problem?
By Sarah Kaufman

Does Apple Have A Leadership Diversity Problem?

Apple has come under fire for its lack of racial diversity, but has more non-white leaders than Twitter, Facebook, eBay and many, many others

Apple came under fire last month for its lack of racial diversity in top company positions. The controversy began after a shareholder-submitted proposal urging the company to recruit more people of color became public. The diversity that does exist in the tech industry, a sector in which some estimate white men make up at least 70 percent of all leaders, has been called a “colorless diversity” focused mainly on white women and gay men. But when compared to other large tech companies, Apple actually leads the pack in racially diverse leadership, Vocativ found.

Antonio Avian Maldonado II, who owns 645 Apple shares, wrote the proposal in September. He said he penned the proposal after browsing photos of Apple’s directors with his teenage son, who asked him why almost everyone was white, Bloomberg reported. Currently, only 3 percent of Apple’s self-proclaimed “leadership” positions are held by black staffers; 6 percent are held by Hispanics.

But Apple is still doing better than Twitter, Facebook, eBay, Google and Yahoo in percentage of diversity hires for leadership positions in the United States. At Apple, 37 percent of the leadership positions are held by non-white individuals, according to the company’s website. The company is tied with LinkedIn and ahead of Twitter—28 percent of its leaders are non-white—and Facebook, where 27 percent of leaders are non-white, according to their respective websites. White people who were not Hispanic or Latino made up 62.1 percent of all Americans as of July 2014, according to census numbers.

Apple also has more women in leadership roles than most major tech companies, according to Vocativ’s calculations. Women make up 28 percent of Apple’s global leaders, which, although a low number, is higher than the percentage of women leaders at eBay, Microsoft, Google, Twitter, Yahoo and Facebook. LinkedIn took the top spot, with women holding 30 percent of the company’s leadership positions in 2015.

Apple responded to the proposal by calling it an attempt to micromanage recruitment. Each year the company releases a proxy statement, a list of issues for its shareholders to discuss during that year. The company has not said whether it will include the proposal on its list of issues to vote on in 2016. If Apple decides not to vote on diversity recruitment in 2016, the Securities and Exchange Commission could bring an enforcement action based on diversity standards, which the SEC clarified as part of its purpose in May.

The controversy around the lack of racial diversity in tech was intensified last week when Twitter hired Apple’s former global head of diversity, Jeffrey Siminoff, a white man. Siminoff’s photo circulated on social media as a symbol of the homogeneity in tech hires. Siminoff, who is gay, replaced a woman in the role. Twitter and Apple have both come under fire for their dedication to LGBT issues while, at the same time, allegedly neglecting to prioritize hiring practices that focus on racial diversity.

@Everette I’ve never worked at Apple, but as a gay woman in tech, I know that white gay men like Jeff are pretty well represented in tech