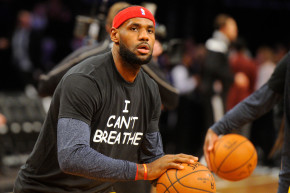 After a grand jury declined to indict two cops in the shooting death of a 12-year-old boy, activists are urging to LeBron James to take a stand by sitting out

After a grand jury declined to indict two Cleveland police officers in the shooting death of 12-year-old Tamir Rice, activists are now urging NBA superstar and Cleveland Cavalier LeBron James to join them in protest.

On Monday night, just hours after the announcement, Tariq Touré, a Baltimore-based writer, published a tweet challenging the Cavs forward to take a stand by sitting out basketball games.

Can we collectively flood @KingJames mentions to remind him not to play? #NoJusticeNoLebron

The #NoJusticeNoLebron hashtag has since exploded within the Blacks Lives Matter movement and beyond, sparking more than 5,700 tweets, according to a Vocativ analysis. In an interview with Newsweek, Touré says a protest from James could “take the movement a bit further.”

James has taken stances against police brutality in the past. After a Missouri grand jury chose not to indict Darren Wilson in the shooting of Michael Brown last November, he shared an illustration of Brown and Trayvon Martin with a caption that read: “As a society how do we do better and stop things like this from happening time after time!!!” A couple weeks later, James donned an “I Can’t Breathe” shirt during a pre-game shoot-around after a grand jury didn’t indict the officers involved in the chokehold death of Eric Garner in Staten Island. In an interview with the Hollywood Reporter earlier this year, James noted talking to his two sons about the Rice case: “I have those conversations with my boys,” he said. “They have tons of play guns. None of them look real… But I don’t even let them take them out of the house.”

Cleveland plays in Denver against the Nuggets tonight, but if the incoming deluge of tweets is any indication, the calls are about to get a lot louder before the Cavs return home to play the Orlando Magic on Saturday.

All we're asking is for @KingJames to use his platform for something bigger than Basketball. He could be so much more. #NoJusticeNoLebron

We love us some black bodies when they entertain us and win games for us. But that’s about it. #TamirRice #NoJusticeNoLeBron

Forget #NoJusticeNoLebron and lets start #nojusticenonba and #nojusticenonfl. Everyone who is someone needs to be in on this issue