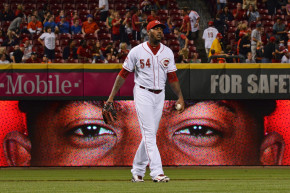 Will It Work? Aroldis Chapman And The Yankees
By Jeff Andrews

Will It Work? Aroldis Chapman And The Yankees Chapman will give the Yankees the most feared bullpen in baseball. — Getty Images
By Jeff Andrews
Dec 30, 2015 at 11:30 AM ET

Pop quiz, hotshot: You have a weak starting rotation but can’t sign anyone because your current starters cost all of the money, what do you do? Well, if you’re the New York Yankees, you trade for maybe the scariest closer in all of baseball. Because reasons.

The Yankees’ acquisition of fireballer Aroldis Chapman from the Cincinnati Reds on Monday gives them potentially the best bullpen in baseball since the team already has a monster setup man/closer duo in Dellin Betances and Andrew Miller. While questions remain about their starting five, it seems the Yankees will be bulletproof with a lead from the seventh inning on.

Chapman traveled a winding road to the Bronx this offseason. In the midst of a rebuilding process, Cincinnati put Chapman on the trade block—who needs an elite finisher to help a young team close out games, right? Earlier in December, reports surfaced that he was heading to the Dodgers, but they backed off after a domestic violence allegation surfaced on the same day. With a possible suspension looming, the Yankees got Chapman for the low low price of four unheralded minor leaguers. This is how the twisted economics of baseball work when an alleged domestic abuser with on-the-field value is up for grabs.

On paper at least, the trade looks like a clear win for the Yankees. Chapman scorched batters last year to the tune of a 1.63 ERA, 116 strikeouts and 33 saves in 66.1 innings pitched, despite being on a team that lost almost 100 games. But a Vocativ analysis suggests that the 27-year-old might not be able to maintain those numbers, if history is any indication. Averaging the statistics of the five most comparable players to Chapman through the age of 27, according to Baseball-Reference.com, we found those players’ numbers took a dive at age 28, which Chapman will be on opening day.

There’s certainly a caveat to this projection. Chapman is a physical anomaly. He throws harder than most anyone who’s ever played the game, meaning there may not be a player comparable to him through the age of 27. That said, Chapman won’t be able to throw this hard forever.

Another interesting possibility for Chapman in New York is moving him from the bullpen to the starting five. The Reds reportedly kicked around the idea of making Chapman a starter earlier in his career. No reports have surfaced since the trade that the Yankees are considering this, but they do have a history of moving promising pitchers from the pen to the starting lineup. Or, given how the bullpen shift worked out for Joba Chamberlain, the Yankees could just slip some polonium into Chapman’s morning coffee and call it a day.