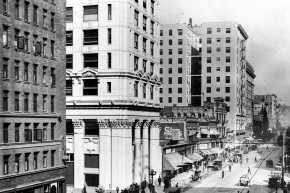 What a difference a century makes

At the end of a new year, we look forward to the future, backwards to the past and into the bottom of a bottle (or several) of champagne. But while 2015 may have made way for big changes in American politics, technology, terrorism, and the Twitter famous, among others, Vocativ decided to look back even further during this time of reflection to find what has changed in the U.S. over the course of the past hundred years. (Spoiler alert: pretty much everything.)

The GDP has swung back and forth over the course of the past hundred years, enduring a stock market crash, the Great Depression, involvement in five wars and six recessions. Despite all this, the GDP per capita has surged overall. As of 2014, the U.S. boasts the tenth-highest GDP per capita in the world.

Though there are more people working than there were 100 years ago, the definition of a day’s work has changed. Following the rise of industrialization in America, growth in labor-intensive fields like transportation, mining, agriculture, construction flourished. A hundred years ago, the U.S. Labor Department was brand new, and Americans typically worked much longer, harder hours. The eight-hour day and 40-hour workweek would not become part of the national standard until 1940.

While Americans are making more, the President certainly isn’t. While his current paycheck of about $400,000 per year puts President Obama well within the top one percent of all American earners, he’s making chump change compared to what 8th president Woodrow Wilson was raking in. At a reported $75,000 per year, Wilson’s inflation-adjusted salary would have been $1,762,396 in 2015 dollars, about four and a half times more than President Obama is paid.

Following several wars and at least two periods of economic near-collapse, the national debt has increased by over 26,000 percent. At the start of this past year, the figure topped $18 trillion, and the next couple decades show a bleak outlook as the population ages and healthcare costs rise. So, if you’re on the fence about Trump’s proposed tax cuts—which could result in a national debt that’s as much as 80 percent of the country’s gross domestic product by 2036—you may want to think about how, in light of our rapidly growing debt, his plan would “make America great again.”

There are three times more Americans today that there were a hundred years ago, thanks to declining mortality and increased immigration. From 1900 to 2000, net immigration was nearly 40 million people, and 330 million babies were born. Though America’s birth rate is on the lower side of global averages now, a massive change in infant morality rates has contributed to the population increase. Across the board, the mortality rate of infants under the age of 1 decreased by 93 percent from 1915 to the end of the twentieth century.

Labor force participation has increased by almost 40 percent for women, and decreased by over 15 percent for men. The shift reflects a notable change in degree-earning Americans by gender: by the 1990s, women aged 25-35 were earning four-year college degrees at a rate equal to men, and they have since surpassed their male counterparts by at least 7 percent. As times have changed, so have attitudes. According to Pew Research, nearly 80 percent of Americans have rejected the notion that women should return to their “traditional role in society” as non-working mothers, and nearly 65 percent of mothers with children age 5 or younger are in the workforce. Further, the number of fathers that do not work out the home has doubled in recent decades, and the National At-Home Dad Network estimates that there are 1.4 million fathers who serve as the daily, primary caregiver of their children. The number of stay-at-home dads not employed outside of the home reached 2 million in 2012, after spiking and then receding slightly following the 2008 recession.

By 1915, Americans were in the midst of a mass migration that coincided with an emerging middle class and the growing reach of transportation systems and cars. While there was a fairly even split in the rural and urban American population at the time, the shift continued towards urbanization. By 1930, the majority of Americans lived in cities.

In 1915, American society was on the precipice of an automobile revolution, thanks in large part to the recent introduction of the moving assembly line by Henry Ford. Since then, cars have dominated American culture, fueled a massive gasoline industry, and forever shaped American culture.

Thanks to advanced technology in healtchare and medicine, people are living up to 45 percent longer than they did 100 years ago. In 1915, the death rate was 13.5 per 1,000 population, the lowest for any year since 1880. Two of the leading causes of death that year were pneumonia and tuberculosis, which resulted in less than 5,500 total deaths in the U.S. in 2013 combined. Thanks to the tuberculosis vaccine, only 555 people died from tuberculosis that year, and most modern pneumonia cases (over 1 million) result in discharge rather than death.