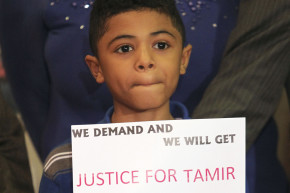 Why Police Thought 12-Year-Old Tamir Rice Was Much Older
By Joshua A. Krisch

Why Police Thought 12-Year-Old Tamir Rice Was Much Older

Black children's ages are overestimated by nearly five years, studies suggest, and they're percieved as less innocent—which may shed light on the Tamir Rice tragedy

On Monday, an Ohio grand jury chose not to indict the police officer who shot and killed Tamir Rice, a black 12-year-old from Cleveland, after the cops mistook his toy gun for an actual weapon. Officers also mistook a child for a grown man.

“It is likely that Tamir, whose size made him look much older…either intended to hand it over to the officers or show them it wasn’t a real gun,” said prosecutor Tim McGinty in a prepared statement Monday.

After the shooting, officers relayed to their dispatcher that a person in his 20s had been shot, CNN reports. At the hearing, a prosecutor claimed Tamir was big for a 12-year old, pointing out Rice was 5 feet 7 inches tall and wore a men’s XL jacket and size-36 pants, according the LA Times. Steve Loomis, president of the Cleveland Police Patrolman’s Association told Politico that Rice was “menacing… He wasn’t that little kid you’re seeing in pictures. He’s a 12-year-old in an adult body.”

Those perceptions—that Rice wasn’t a kid but a “menacing” man—may have determined how police responded. And according to a recent study, they’re not unique to Rice. In a paper published last year in the Journal of Personality and Social Psychology, researchers found that black boys as young as 10 are perceived as older and less innocent-looking than their white peers, implying that black children are more likely to be treated like adults by scared police officers.

More ‘Sad But Not Surprised:’ No Charges In Tamir Rice Shooting

“Children in most societies are considered to be in a distinct group with characteristics such as innocence and the need for protection,” said Phillip Atiba Goff, psychologist at the University of California, Los Angeles and coauthor on the paper, in a prepared statement. “Our research found that black boys can be seen as responsible for their actions at an age when white boys still benefit from the assumption that children are essentially innocent.”

Broadly, the scientists were trying to determine how various types of bias may influence police brutality against black children. They conducted a handful of different experiments to this effect (some involving police officers, others involving students at a mostly-white college) and tested how each group perceived black people, and specifically black children, in a variety of different situations.

In one experiment, researchers asked 116 police officers (most of whom were white) whether they agreed with statements such as, “It is likely that blacks will bring violence to neighborhoods when they move in” and then asked the officers to pair photographs of black and white people with either lions or apes (prior studies suggest that people who compare blacks to apes are more likely to dehumanize them). After reviewing personnel files, they found that officers who compared black people to apes, and thereby dehumanized them, were more likely to have used force on black children than officers who simply exhibited prejudice by agreeing with disparaging statements.

More interesting, however, was a separate experiment in which the researchers asked 123 white college students to rate the innocence and trustworthiness of people who appeared in photographs. They found that pretty much all children were deemed innocent until around age 10. But after that, volunteers continued to rate white children as “innocent” until adulthood, while rating black children less innocent and less trustworthy. And then in a third experiment, 59 students were shown photos of white, black, and Latino children (none of whom were actually accused of a crime), alongside a randomly assigned accusation and then asked to assess their age. Volunteers overestimated black children’s ages by an average of 4.5 years when they were suspected of a felony and slightly over two years when they were suspected of a misdemeanor.

Together, these studies suggest that black children are presumed less innocent and less trustworthy than white children, and that when they are suspected of a crime, black kids are perceived as much older than they actually are. In the public imagination, it seems, everyone is “just a kid” until age 10. After that, white kids get to be kids for another decade or so, while black kids are perceived to be guilty, potentially dangerous, adults. From the paper:

Racially differential treatment of children is an important yet under explored arena within social psychology. The present findings suggest how urgently field and laboratory work are needed to fill in this research gap. In addition, they suggest that if, as Alice Walker says, “The most important question in the world is, ‘Why is the child crying’ then, for Black children, the most important answer may be that they cry because they are not allowed to be children at all.

The effects were especially pronounced after age 13, when black children truly begin to, “lose the protection afforded by assumed childhood innocence,” said Matthew Jackson, psychologist at UCLA and coauthor on the paper, in a prepared statement. “With the average age overestimation for black boys exceeding four-and-a-half years, in some cases, black children may be viewed as adults when they are just 13 years old.”

Or, as the Tamir Rice case tragically taught us, occasionally even younger than that.