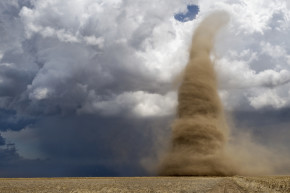 Inside The Fearless, Turbulent Online World Of Storm Chasers
By Jennings Brown

Inside The Fearless, Turbulent Online World Of Storm Chasers

A network of chasers find frustration, camaraderie and solace through forums and live streaming 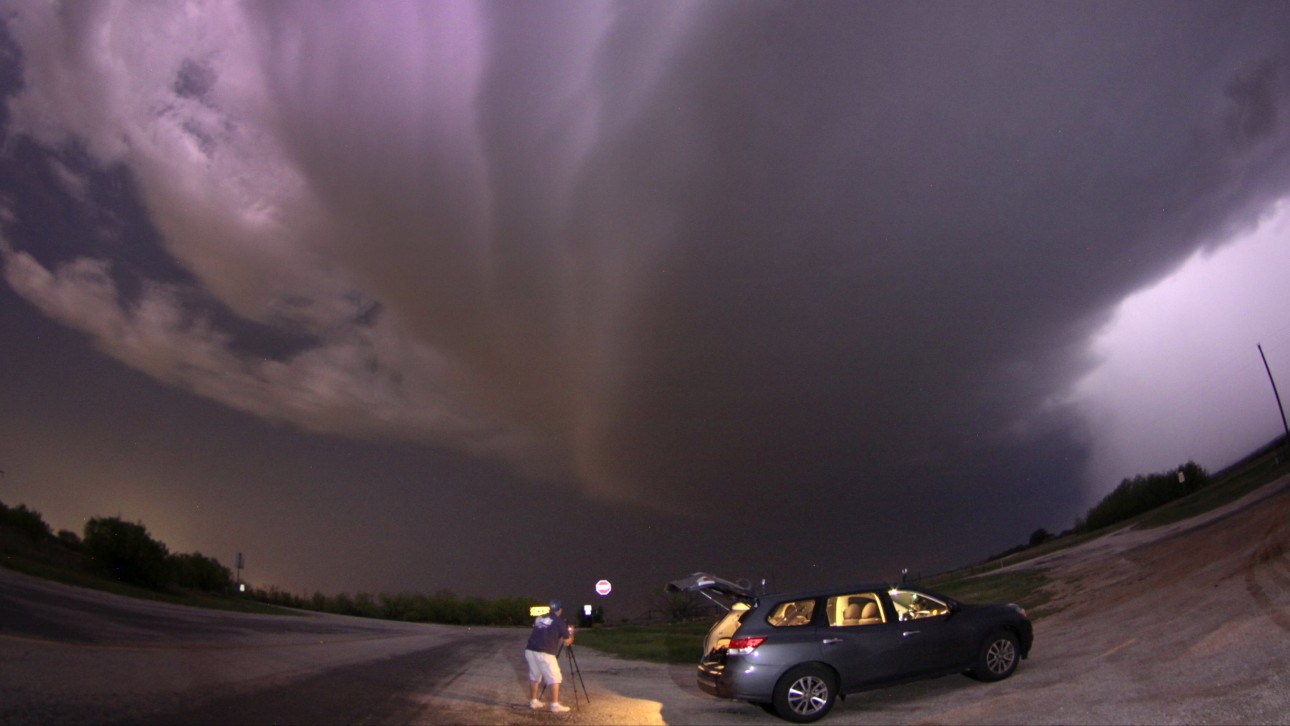 Thousands of storm chasers—the adrenaline junkies whose idea of a fun afternoon is chasing a tornado—can now connect from across the country through social technology and streaming apps. And that’s causing a rift between veteran chasers and the flood of thrill-seeking newcomers.

The most popular storm-chasing online forum, Stormtrack, hosted a flurry of activity as the year came to an end. Severe weather killed nearly 50 people and caused extreme travel delays over the holiday season, but the uptick in tornadoes was an unexpected Christmas present for several chasers who posted their prize shots of funnels touching down and celebrated their “best chase of 2015.”

This sense of community has played an integral role in storm chasing since its beginning 60 years ago. David Hoadley, considered the father of storm chasing, founded Storm Track magazine in 1977 as a means of “connecting a handful of dedicated storm chasers,” according to Stormtrack, the magazine’s digital legacy.

Now that handful has grown into a network of thousands of chasers across the country. Stormtrack members don’t just share their “war stories” on the site, they also use it to meet up with other chasers. Kelley Williamson started a thread to find a chasing partner, and Andreas Winsnes asked for financial advice on budgeting while chasing with a partner, which inspired an enlightening conversation on the cost of chasing. In the end, Winsnes decided that he would budget $2,000 for each month in the field.

The site includes discussions about everything from tornado prediction tips to storm photographs featuring Christmas decorations to information on ChaserCon 2016, a national storm-chasing convention taking place in Norman, Oklahoma in January. But storm chasers will tell you that those forums are just the tip of the funnel cloud.

“When I was younger and went out [storm chasing] with my parents, we just had a ham radio,” said Krissy Heishman, who lives in Texas and was on the ground for the Dallas-area tornadoes that killed 11 over the weekend. But these days she connects with other chasers by watching TVNweather, a storm-chaser streaming service that gets thousands of views during major storm events, and by using the Radarscope app, where thousands of members of the “Spotter Network” log in and share their coordinates during a chase. To join the network, “Spotters” have to take an online test in basic meteorology.

Storm chasers can use these apps to digitally follow chasers whom they admire, or to physically follow them when trying to find the best place to view a storm. Meteorological enthusiasts can watch live streams and live vicariously through chasers. These tools are helpful for any amateurs who want to start chasing—which is why many expert chasers despise the apps.

“A couple years ago, when I still streamed, I was chasing a storm in Texarkana [Texas] and I had a person follow me all the way from Austin [375 miles away], simply because he saw me on one of those apps. It’s becoming a problem where social media is starting to hurt us,” said Bart Comstock, a veteran chaser of 12 years who has been inside multiple tornadoes. “Most of us [experienced chasers] are starting to communicate in backchannels on social media. We’re less willing to post where a target area is because we’ve got what I call ‘cling-on people’ who are going to ride your bumper all day because they feel like you’re going to take them to a tornado.”

Comstock insists that he’s not just a “member of the old guard yelling at kids to get off his yard.” There are several young chasers he and other veterans admire—like Pecos Hank and high school student Max Olson—but he has noticed that most newcomers are making chasing more difficult for the pros. He said beginners often film similar footage to that of veterans but then give it away for free, hoping it will go viral, while he is trying to make enough money selling videos to media organizations to pay for his equipment. “In the last five years there has been a large glut of people joining storm chasing,” Comstock said. “They are people trying to emulate what they saw on television, to get famous, get noticed, find those five minutes of fame. And it’s really starting to water down the community. That almost caused Stormtrack to disappear.”

Stormtrack began deteriorating around 2010, as the Discovery Channel series “Storm Chasers” and viral YouTube videos of epic storms were inspiring a new breed of chasers. Consequently, rules for joining the chaser community grew more lax to accommodate the influx. Comstock was a moderator at the time. He and other mods pleaded with owner Tim Vazquez to change the rules. “A lot of the new kids joining the site would not allow themselves to be open to critique from more experienced chasers, and flame wars would often erupt,” Comstock said. “As such, many [veterans] left or just stopped using Stormtrack all together and moved to Facebook.”

The turmoil was likely one of the main reasons Vazquez handed over ownership to another chaser, Steve Miller, last January. But the transition hasn’t done much to win back veterans. “Even today, Stormtrack is still a shell of its former self,” Comcast said.

Veterans aren’t the only chasers who have noticed discord within the community. Heishman, who has chased dozens of storms, but is still decades behind Comstock, said she has seen some chasers try to disgrace others. “When someone thinks they have a super-great video, but another chaser’s goes viral, I’ve seen people get dramatic about that,” Heishman said. “There’s selfish behavior—sabotaging [of other videos online].”

Storm chaser Dan Robinson might be the victim of a saboteur. According to his October post on Stormtrack, someone is trying to discredit a storm video he shot in 2007, which has been viewed about 64,000 times. “It has come to my attention that there is a rumor being spread around that my footage of the Greensburg, Kansas tornadoes on May 4, 2007 is suspect/fake/altered/misattributed, etc.” Robinson wrote. “I’ve been informed that this accusation is even being forwarded to television production companies, who have started questioning me about it.”

Robinson asked his accuser to show their proof that his work is invalid, but two months have passed and no one has come forward.

Despite tension within the ranks, the respect that novices have for the pros within the community is undeniable. It’s apparent in the way younger chasers literally chase their elders in the field and in the way all spotters eulogize fallen veterans. To honor three storm chasers who died in the 2013 tornado that devastated Moore, Oklahoma, hundreds of chasers on the Spotter Network used the Radarscope app to pay tribute. “All these chasers coordinated to be positioned all over the plains to make the initials [of the deceased storm chasers],” Heishman said. “I cried when I saw.” 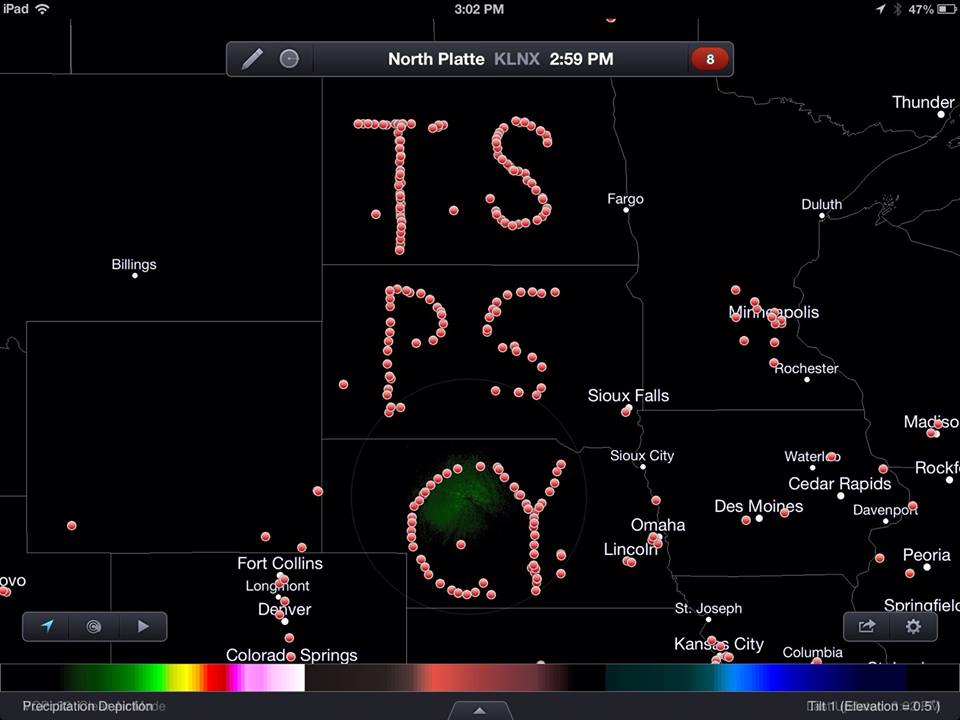