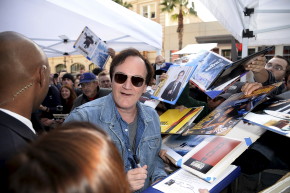 How often does the bare female foot appear in his films?

Foot footage was conspicuously missing from Quentin Tarantino’s most recent film The Hateful Eight. If you have seen his movies, you are aware of Tarantino’s foot fetish, because all but two of his eight films feature luxuriating shots of the nude female foot.

In all, the bare foot has graced a Tarantino screen for a total of 10 minutes and 24 seconds of movie time. Jackie Brown has the longest footage of feet, at 2 minutes and 19 seconds (1.45 percent), followed by Pulp Fiction at 2 minutes and 13 seconds (1.32 percent). Proportionately though, Uma Thurman and her little piggies win with 1.77% and 1.59% of respective running time in Kill Bill Vol. 1 and Vol. 2.