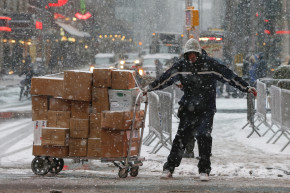 How FedEx Stole Christmas
By Joshua A. Krisch

To paraphrase the Internet on Christmas Day: you’re a foul one, Mr. FedEx.

Children eagerly awaiting deliveries from Santa were disappointed when, due to a mixture of inclement weather and last-minute Internet purchases, FedEx failed to deliver packages on time. The Internet was furious. Tweeting under the hashtag #FedExFail, angry FedEx patrons vented with all the Christmas cheer they could muster.

This isn’t the first time we’ve seen delivery delays on Christmas. In 2013, both UPS and FedEx failed to deliver many packages on time, due to similar weather-related delays. But UPS seems fine this time, with a representative telling the Wall Street Journal that, “UPS has worked closely with customers to establish detailed operating plans to ensure available capacity and cut-off times are understood so there are no surprises for either party.”

FedEx, on the other hand, blamed the Internet. Last week, in anticipation of the holiday rush, FedEx Chief Executive Fred Smith told the Wall Street Journal that, “the people that have the real problem in the e-commerce business by and large are those that view the transportation companies as some sort of utility or a vendor and they make some really, really bad decisions.”

But FedEx, to its credit, didn’t leave it at that. And what happened, then? Well, in Whoville they say, that FedEx’s small heart grew three sizes that day.

“FedEx is doing everything possible to get customer shipments delivered by Christmas in spite of slight delays,” spokeswoman Rae Lyn Rushing said in a statement. FedEx decided to keep stores open on Christmas Day for in-person pickups, and it says some drivers volunteered to work overtime to deliver packages before the weekend. It won’t kill the hashtag—everyone loves complaining about FedEx—but it should spread at least some holiday cheer.

Yay #fedex you did such a great job not delivering my packages on time. My kids thank you for getting far less presents #fedexfail

@FedEx really bummed that I paid extra for shipping and still don't have my husband's gifts. #Refund #FedExFail

#fedexfail-FedEx just plain sucks !!!! EVERY time this year I've ordered online, FedEx loses it, damages it, or it it's late...