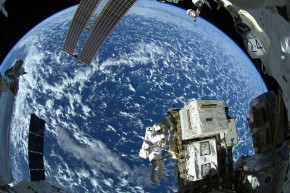 How The International Space Station Became Santa’s Sleigh
By Joshua A. Krisch

On Christmas Eve, NASA told children to look skyward to see the ISS flying overhead. Here's how you can spot the space station yourself

Dashing through the thermosphere in a solar-powered hunk of metal, the International Space Station delighted children around the world Thursday night, when NASA announced that it would be passing overhead just in time for Christmas Eve. NASA instructed junior astronauts to look skyward to see “Santa’s sleigh” flying by, delivering presents to children (or, you know, doing science).

Space station sightings are actually fairly frequent phenomena. After the moon, the International Space Station is the second brightest object in the night sky. (Venus was a close contender until a new set of solar arrays were delivered to the ISS in 2009.) The ISS is so bright, in fact, that you can even see it from the center of a major city. Since the ISS travels at an average speed of 17,000 miles per hour, it actually completes an orbit every 90 minutes or so. NASA has even produced a nifty Spot the Station program that will send you an alert when the ISS is in your neighborhood.

But for amateur astronomers (and Santa enthusiasts) NASA alerts may feel too much like cheating. Fortunately, Universe Today put out a viewing guide in 2012 that has a few pro tips for catching a glimpse of one of humanity’s greatest scientific achievements as it passes overhead.

First of all, you have more than one shot most nights. If you’re willing to lie on your back in a field for an entire evening, you could theoretically see the ISS pass by as many as eight times in a 12-hour period—or, more realistically according to Universe Today, three or four passes in an evening.

The key is, not surprisingly, knowing where to look. The ISS always passes by from the West to the East, but not always at the exact same part of the western horizon. For an exact location, stargazers simply must rely on NASA’s forecast, which includes statistics on the ISS’s maximum elevation that evening, usually given in degrees. Once you have that data, it’s fairly easy to ballpark the rest. From Universe Today:

A few signs that you’ve spotted the ISS and not an airplane (or a sleigh) is that it has no flashing lights and it seems to glide across the horizon. So even after Christmas, look up! Santa’s sleigh is going to keep on passing overhead for quite some time, pushing the limits of scientific exploration and inspiring eye-rolls from unimpressed, scientifically superior children.