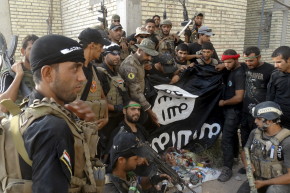 Iraqi forces are moving into the city, setting off fears from ISIS supporters over the group's fighters still there

ISIS supporters are watching the military campaign to take back the Iraqi city of Ramadi with growing concern and fear for the several hundred fighters left behind, filling social media with requests to “pray for Ramadi.”

Iraqi forces including units equipped and trained by the U.S. military have all but surrounded the city, which is the capital of Anbar province in the west, and a key Sunni stronghold. Reports are saying that troops have reached the city center. Iraq’s army chief of staff said the end was close at hand. “In the coming days will be announced the good news of the complete liberation of Ramadi,” said Lt. General Othman al-Ghanemi, according to Reuters.

Online, the battle for hearts and minds has neared frenzied levels. ISIS supporters created #PrayForRamadiCampaign and #RamadiTheGraveyardOfEnemies hashtags on Twitter, posted propaganda missives claiming there was no battle, but also calling for support and solidarity with ISIS fighters on the ground. “Reports are talking about preparations of 60,000 fighters from the Iraqi Army and the Shiite militias to storm Ramadi. My brothers, I am asking you to pray for the soldiers of the Caliphate,” wrote one supporter. Others talked up the number discrepancy; a battle of few against many, as “only less than 600 Mujahideen” are reportedly fighting against the thousands of troops as well as fighter jets firing strikes from the air. “Pray for the soldiers of Ramadi, don’t abandon your soldiers, I am asking from everybody to post this hashtag,” said another. Threads on ISIS forums, found using Vocativ’s deep web technology, opened with calls to pray for the ISIS fighters holed up in Ramadi.

But the propaganda war also persists. Some supporters circulated images claimed to have been taken on Tuesday from the city center showing people walking in the streets, playing football and buying sweets at the market. ISIS claimed responsibility on Wednesday for the death of 12 Iraqi soldiers and Shiite militia who tried to enter the city from the north, although that couldn’t be independently verified.