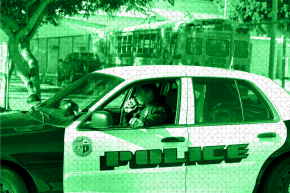 The letter sent to New York City officials came from a stunt email server about cocks, according to reports

A bomb threat sent to the New York City schools may have come from cock.li, a stunt email provider and notorious Internet “meme sewer,” according to subpoenas posted online and reports.

Both Los Angeles and New York City schools received similar threats Tuesday, but New York quickly dismissed it. L.A. took the threat more seriously, closing down its entire system of more than 900 schools. It’s not confirmed that the same address sent both emails, though the emails are said to be nearly identical. One reporter indicated the specific email address used was “[email protected]”

The threat came via email from someone claiming to be “an extremist Muslim who has teamed up with local jihadists,” according to California Rep. Brad Sherman. Sherman, who spoke to the LA Times, said the letter offered no proof the sender actually had links to Islamic terror groups—and the author didn’t appear be well-versed in Islam. The email also mentioned explosive devices, assault rifles and pistols and was traced to an IP address in Frankfurt, Germany, according to law enforcement sources, the LA Times reported.

“The preliminary assessment is that it was a hoax or something designed to disrupt school districts in large cities,” said Californai Rep. Adam Schiff in a statement. “There isn’t a person on the street who couldn’t have written this.”

The site Cock.li published a copy of a subpoena it says it received from the New York City Police Department, which had contacted the site on Tuesday following similar threats made to New York public schools there. New York City officials, including Mayor Bill de Blasio and Police Commissioner Bill Bratton, quickly dismissed the email as a bogus threat.

A Twitter user who says he’s the proprietor of Cock.li (his Twitter account links to the Cock.li homepage) also posted the subpoenas, and claimed the same address was used to threaten both cities. The user also condemned the threats.

The person behind the #LAUSD threats used cock.li to do it. Threatened NYC SD as well. https://t.co/vy8WYTw0kI pic.twitter.com/WOZr2Zy0Z7

Subpoena sent today to meme email provider for "threatening email to the superintendent of the NYC Public schools". pic.twitter.com/iWgP51cOQS