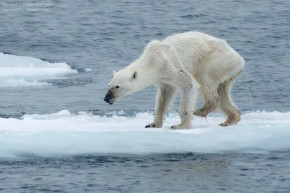 Here’s one for the climate change deniers: Over the past year, the average air temperature over Arctic land increased by 2.3 degrees Fahrenheit compared to average baseline temperatures in the same area. This is the highest average air temperature over Arctic land in observational record. That’s according to the 2015 Arctic Report Card, released Tuesday by the National Oceanic and Atmospheric Administration. The report also reveals higher freshwater discharges into the northern ocean and loss of walrus habitat.

Here are the numbers you need to know from this year’s Arctic Report Card.

Maximum Arctic Ocean sea ice extent, which marks the day of the year when sea ice reaches its largest coverage area, occurs at the end of the winter cold season. This year, that occurred on February 25, 15 days earlier than average, and the maximum extent of the ice was the lowest measured since records began in 1979. First year ice, which is ice that only accumulates for up to a year before melting, made up 70 percent of the ice pack in March, compared to about half that in the 1980s. This means that the sea ice that does exist persists for shorter periods of time. There are important consequences for Arctic wildlife, particularly walruses. These animals traditionally use sea ice for mating, and the rapid decline in sea ice is dramatically changing their habitat. In recent years, walruses have been forced to haul out onto land, leading to overcrowding which has led to stampedes in which calves have been killed, as well as general difficulty finding food.

Over half of the Greenland ice sheet, which covers 80 percent of Greenland, endured some level of melting this year. This is the first time such a large portion of the sheet has experienced melting since 2012. Melt season, the duration of the year when ice is actively melting, was 30 to 40 days longer than average in western, northwestern and northeastern Greenland. A long melt season results in greater volume loss of ice, leading to increased fresh water discharge and, ultimately, a rise in sea level. Greenland’s glacial retreat was also an issue: 22 of 45 of the widest and fastest flowing glaciers terminating in the ocean had retreated between the end of the 2014 and 2015 melt seasons. However there was some glacial advancement in Greenland this year; nine relatively wide glaciers advanced. With retreat and advancement combined, the annual net loss of ice here was a relatively low 6.4 square miles.

Fresh water discharge from eight Eurasian and North American rivers into the Arctic Ocean was 10 percent higher during 2014 and the first seven months of 2015 than in the 1980s. This is likely due to a global warming-linked increase in precipitation, according to the report.

This year’s June snow cover in both the North American and Eurasian parts of the Arctic was the second lowest since records began in 1967. This is consistent with trends in snow cover decrease since 1979: June snow extent has declined 18 percent per decade since that year. Snow cover extent impacts the climate system in important ways. When highly reflective fresh snow melts, its albedo—a coefficient that describes a substance’s reflectiveness, and, thus, how much solar radiation it reflects—is lowered. For snow, a higher albedo results in more solar radiation being reflected; a lower albedo results in more solar radiation being absorbed, leading to further temperature rise and, in turn, more melt.