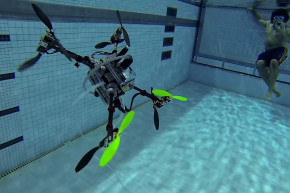 This Awesome Drone Can Conquer Both Sea And Sky

Researchers developed a flying bot that can also swim

In the latest development in drone technology, scientists at Rutgers University have created a quadcopter that can swim as well as it can fly. Behold the Naviator, a Navy-funded project that offers a new, exciting kind of drone versatility.

Back in October, the Office for Naval Research awarded Javier Diez, a professor at Rutgers’ Department of Mechanical and Aerospace Engineering, a grant of $618,000 to build a prototype for his sky and sea concept. The Naviator’s adaptability offers a huge amount of possibility — potential uses range from bridge inspections to the early investigations of oil spills to search and rescue missions, but the Navy is most interested in its ability to discover mines.

“They told me they’d never seen anything like it,” said Diez.

There are still two big hurdles to overcome though. Since radio signal don’t work well underwater, the current prototype needs to be attached to a thin cord. Another issue is that the Naviator can’t muster enough strength to carry a payload just yet. Diez hopes to have both of those problems solved by next summer.

“At that point, we’ll start to outfit it with whatever sensors the Navy wants to have, such as cameras and sonar detectors,” he said.