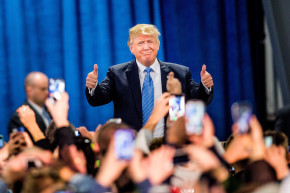 Hey, Trump: Terrorists Might Love Your “Muslim Ban”
By Joshua A. Krisch

Terrorists may attack just to provoke a backlash against their own people.

After Donald Trump pushed for an immigration ban on all Muslims earlier this week, the Onion ran an excellent satire piece: “Trump Gives Muslim On Fence About Radicalizing Just The Push He Needed”. The story echoed concerns from both sides of the aisle that Trump’s anti-Muslim rhetoric provides fodder for ISIS and other terrorist organizations bent on radicalizing moderate Muslims.

There’s some data to back up those fears. In a study due to be published in the journal Economics, economists from Hebrew University in Israel proposed that a spate of anti-Muslim hate crimes after 9/11 gave rise to isolated pockets of American Muslims who would have otherwise integrated into their communities. Prior studies have suggested that hate crimes and hate speech (we’re looking at you, Trump) play right into the terrorists’ hands.

“Existing models argue that extremist groups commit terror attacks with the goal of provoking a backlash in order to radicalize moderate supporters, ” write Eric D. Gould and Esteban F. Klor of Hebrew University, in their study.

After 9/11, the rate of hate crimes committed against Muslims skyrocketed from 28 attacks in the year 2000 to a stomach-turning 481 in 2001, according to self-reported hate crime data collected by the FBI. Using the FBI data, Gould and Klor performed the first empirical study of the backlash after anti-Muslim hate crimes, and found that Muslim immigrants living in areas with the sharpest increase in hate crimes also appeared to be less assimilated than their peers.

“In states that had the biggest backlash against Muslims—and we measure that by how many hate crimes there were—we found that Muslim immigrants in those states had the slowest rates of assimilation,” Gould says. Gould and Klor measured rates of assimilation based on whether immigrants married within their own religion, spoke English at home and continued to maintain traditional Muslim family values and gender roles.

Gould admits this isn’t a perfect way to measure assimilation, but “that’s all we have in the data,” he says. In future studies, Gould adds, “I would like to ask them about their attitudes toward assimilation, towards identity.” Indeed, one could easily conceive of well-integrated immigrants who simply chose to marry within their own religion and maintain their traditional values and culture. In the absence of psychological data, however, “whether you marry within your community and whether you speak English at home are frequently used as measures of assimilation in the academic literature.”

Obviously, America isn’t the only place where xenophobia has likely contributed to lack of integration. A 2010 study found that the immigrant Muslim community in France remained largely unintegrated into the general population, due at least in part to workplace discrimination. Gould’s research suggests that the United States, especially in areas rife with anti-Muslim hate crimes, will likely face similar challenges for similar reasons.

That doesn’t mean we’ll necessarily see an uptick in terrorist attacks. The vast majority of religious Muslims living in the United States, even after being targeted by hate crimes, would never dream of committing an act of terror. “Although Westerners tend to link a heightened Islamic identification with radicalization and violence, there is no consistent and systematic evidence of such a link,” Gould and Klor write.

But the terrorists can certainly try. In a 2011 paper, researchers Sandeep Baliga and Tomas Sjostrom of the Kellogg School at Management at Northwestern University demonstrated that terrorists often have the express goal of provoking a backlash against their countrymen, because they believe outrage to be an effective recruiting tool. (Whether this was true in the case of 9/11 is unclear: “We found little evidence suggesting that this was among Al Qaeda’s strategic goals,” write Gould and Klor.) However, if we may extend this argument to the current instances of ISIS-inspired and ISIS-perpetrated violence, it’s possible that the attackers commit these acts not only to maim and frighten, but also to provoke a violent backlash that in turn helps them recruit.

So, there’s some irony to Trump’s rhetoric—for all his fear-mongering, the science suggests Trump is playing right into terrorists’ hands. Terrorists likely want our leaders to make sweeping accusations about 22 percent of the world’s population. Terrorists likely want us to commit hate crimes against random Muslims (or people wearing vaguely Middle Eastern clothing).

Donald Trump and his ilk are giving the terrorists exactly what they want.