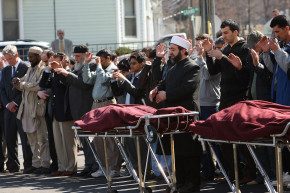 The Deadliest Mass Shooting Everyone Forgot
By James King

The Deadliest Mass Shooting Everyone Forgot

13 people were killed in a mass shooting in Binghamton, New York in 2009—and the world seems to have forgotten all about it

Roberta King, a 72-year-old mother of 10, got a call asking if she could substitute teach a class at the immigrant resource center where she taught English part-time.

“She was the sweetest, gentlest woman around,” her son, Dr. Jeffrey King, told Vocativ. “She wasn’t even supposed to be there that day, but she loved it. And the students loved her, so when she got the call, she was happy to say ‘yes.'”

The next morning, a former student burst into her classroom armed with both 9mm and .45-caliber Beretta handguns. He fired nearly 100 rounds at unsuspecting students and staff members before turning the gun on himself. King, whose friends called her Bobbie, was one of the 13 people killed that day. The majority of the others were immigrants, taking a class at the American Civic Association in Binghamton, New York.

The 2009 mass shooting in Binghamton is one of the deadliest in recent U.S. history—and yet, outside of the community, it appears largely forgotten. A litany of towns and place names have become symbols for gun violence—Aurora and Fort Hood, Sandy Hook and Columbine—but Binghamton is rarely among them.

It was the first of 15 mass shootings that President Obama has commemorated since he took office in 2009. “Michelle and I were shocked and deeply saddened to learn about the senseless violence in Binghamton, NY, today,” he said. But in the 14 post-shooting addresses he’s delivered since, he’s never referenced it. After the shootings at the Navy Yard in 2013, Obama said, “As president, I have now grieved with five American communities ripped apart by mass violence: Fort Hood. Tucson. Aurora. Sandy Hook. And now, the Washington Navy Yard.”

Roberta King (center) with her 10 children.

Last week, in response to the shootings in San Bernardino, the New York Times published a historic op-ed titled “End The Gun Epidemic In America” on its front page. It referenced, among others, the mass shootings in Colorado, Oregon and Charleston. It made no mention of Binghamton. Neither did editorials on gun violence in the Washington Post, L.A. Times and other major outlets.

It’s not because of the scale of the tragedy: more died in Binghamton than in the killings in Aurora, Colorado, the Washington Navy Yard, and a church in Charleston. Counting the death of the shooter, it was deadlier than the massacre at Fort Hood. Nor is it because it was so long ago; the frequently remembered shootings at Columbine happened 10 years prior, and the Fort Hood massacre was just a few months later in 2009.

In the town of about 50,000 in upstate New York where it occurred, the massacre is far from forgotten. With another tragedy still dominating headlines, the friends and families of those who died can’t help but notice its omission.

“It annoys the hell out of us,” Dr. King said. “We always felt sort of dismissed. It was odd that 13 people were killed and we’re rarely even part of the discussion. We always sort of wonder why publications would run something about a shooting and everyone was listed but we’re not… like it wasn’t traumatic enough.”

There are few differences between what happened in Binghamton in 2009 and other mass shootings. A gunman, in this case Jiverly Wong, a former student at the center, returns to a familiar place and kills indiscriminately. But, Todd Gitlin, chairman of the Ph.D. program at Columbia University Graduate School of Journalism, said he can’t remember even hearing about the shooting in Binghamton. “It’s remarkable,” he said, “how that many people were killed and it seems like it just flew under the radar… there is a lapse somewhere here.”

But, Gitlin proposed, there are a few reasons it may have received less attention. One possibility, he said, is who died. When a madman stormed Sandy Hook Elementary School and murdered 27 people, most of the victims were American children with American families. When former Army Major Nidal Hasan shot up the military base in Fort Hood, all but one of the victims were U.S. soldiers. In Binghamton, with the exception of King, the victims were foreigners from places like China, Haiti, Pakistan and Iraq. And Wong, the shooter, was born in South Vietnam to Chinese parents before moving to New York in the 1980s.

“Take a comparable event like a plane crash,” Gitlin said. “More Americans, more coverage. More Europeans, more coverage. But this is different.” He said looking at other major news events that happened around the same time might also explain why the media coverage was limited, but that doesn’t explain why the Binghamton shootings aren’t often mentioned along with other, similar shootings, or by gun control advocates.

Bobbie King’s son agrees. “That’s the only reason I can think of in terms of why people didn’t care as much as they do about some of the others,” Dr. King said of the fact that the Binghamton victims were primarily immigrants. “It definitely made national news for the first couple of days like [other mass shootings]. We had CNN and MSNBC knocking on our door every day for a few days but then they moved on and forgot about us.”

More The Fallout From Naming A Mass Murderer

Matt Ryan was the mayor of Binghamton in 2009 and was a key figure in the initial media blitz that hit the small city, located about 180 miles northwest of New York City and home to Binghamton University, an elite school within the State University of New York system. One day, he said, the media interest just stopped.

“I was hoping it wasn’t because most of the people weren’t Americans but I can’t think of any other reason,” Ryan said. “It is kind of a mystery why Binghamton isn’t part of the [mass shooting] lexicon, which I’m glad about in some ways–that’s not necessarily something you want to be known for.”

While the number of headlines generated by the shooting in Binghamton may not rival many of the other mass shootings, Ryan said, the pain it has caused the victims’ families and the community as whole certainly does. “I went to every funeral, and by then most of the media had left,” he said. “It was the worst two weeks of my life. But the biggest crowd was for Bobbie King because she was from the community and people knew her.”

King’s son said he was “a walking zombie” after the shooting. “For me, going to work helped. It got my mind off of things. It took a year or two before things got reasonably back to normal. It’s an unbelievable shock that someone would be so healthy and their life just ends.”

Dr. King said his heart goes out to those in San Bernardino who are currently dealing with a sense of grief to which he is all too familiar. “It is beyond any emotion you can understand. Every person will recover and heal and cope with it in different ways. It is a very long process. Weeks wouldn’t even describe the amount of time–it’s years… it’s affected my sleep for years. I remember waking up in a panic with the horror of seeing people being shot. I’m a surgeon–I’m a guy who sees blood and guts every day. But nothing prepared me for the dreams.”