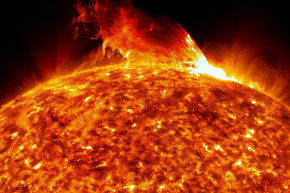 Solar “Superflare” Would Be A Disaster For Life On Earth
By Joshua A. Krisch

Solar “Superflare” Would Be A Disaster For Life On Earth

Our sun is capable of producing extreme solar flares, or "superflares", that could wipe out GPS and electricity

Solar flares are magnificent bursts of energy that erupt from the surface of the sun hundreds of times every year. Usually they’re harmless; occasionally they mess with the electrical grid. But according to a recent study published in The Astrophysical Journal Letters, our sun is capable of producing a flare ten times larger (and more destructive) than any solar flares we’ve seen so far. It’s called a superflare—and it’s no fun at all.

“If the sun were to produce a superflare it would be disastrous for life on Earth,” said Chloë Pugh, astrophysicist from the University of Warwick and coauthor on the study, in a prepared statement. “Our GPS and radio communication systems could be severely disrupted and there could be large scale power blackouts as a result of strong electrical currents being induced in power grids.”

More NASA Is On A Mission To Touch The Sun

Astronomers have known for decades that some distant stars produce superflares, but they concluded that our own docile sun was probably unable to deliver much more than an average flare. Most solar flares release energy equal to about 100 million megaton bombs, but a superflare can release energy equivalent to one billion megaton bombs. Explosive power is measured in relationship to TNT, so here the megaton refers to the amount of energy released when detonating one million tons of TNT. For reference, the “Little Boy” nuclear weapon dropped on Hiroshima was described as having approximately a 15 kiloton blast yield, or around 0.015 megatons.

Now, based on observations from the Kepler space telescope, it appears that a binary star within our own galaxy called KIC9655129 is capable of superflares—and that the underlying physics on KIC9655129 is entirely within our sun’s capabilities.

Researchers study solar flares by examining wave patterns emitted from stars. In the case of KIC9655129, the scientists found a rapid increase in the star’s intensity, followed by a smooth decline with two “QPPs” or short jolts on the waveform. After determining that the QPPs were almost certainly not due to random error, the researchers concluded that they were the telltale signs of solar flares, and that those solar flares were produced by the same sort of mechanism that our sun uses to produce its own minor solar flares.

This suggests that when KIC9655129 produces a superflare, it’s likely making use of a mechanism that is entirely within our sun’s capabilities. “This result is, therefore, an indication that the same physical processes are involved in both solar flares and stellar superflares,” said Anne-Marie Broomhall, astrophysicist at the University of Warwick and coauthor on the study, in a prepared statement.

“[This] supports the hypothesis that the Sun is able to produce a potentially devastating superflare”.