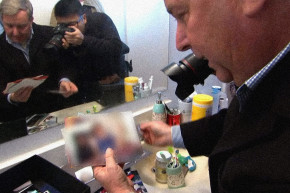 The media did something dumb—but some people see malevolence, and conspiracy, in San Bernardino

A brazen scrum of journalists stormed the home of the alleged San Bernardino shooters on Friday, triggering an online flood of conspiracy theories that were as outlandish as the scene that unfolded on live television.

The bizarre episode began after the building’s landlord threw open to the door to dozens of reporters, who then rooted through the personal belongings of Tashfeen Malik and Syed Farook like a pack of wild hogs on the hunt for acorns.

As journalists flaunted photos of unidentified children and picture IDs in front of cameras, some of the Internet’s more skeptical denizens believed they were witnessing a colossal charade. A pair of conspiracy camps quickly took shape.

There were those who believed that the liberal media was destroying evidence to protect President Obama:

The media is so scared of saying "Muslim Terrorists" that they are now sabotaging investigations. https://t.co/tBPa4QHSau

@DLoesch Liberal media is trying to hide the other members of this ISIS terror cell? At Mullah Obama's orders?

Another group concluded that the episode furthered the false flag theory that the shooting never even took place:

@lizzyf620 @MSNBC Ever wondered how they were able to get those documents that everyone keeps with them? Clearly planted. #falseflag

For others, the incident seemed simply to reinforce the growing resentment that a majority of Americans now have for the mass media.

@GrasswireNow just like the movie #night stalker. Some reporters have no respect for anyone or anything. Just need to be exclusive or first

@yamphoto @LANow this is a disgusting, sorry excuse for journalism. you should be ashamed.