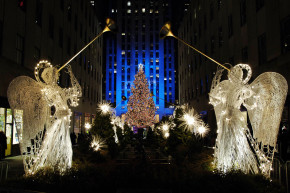 This year’s Rockefeller Center Christmas tree is nearly 80 feet tall, weighs about 10 tons and is adorned with 45,000 multi-colored LED lights—a seasonal tradition that happens to pump roughly 54 tons of carbon into the atmosphere.

More Scientists To Pope Francis: Condoms Will Save The Planet

To be fair, the Rockefeller Center has done what it can to reduce the tree’s carbon footprint. In 2007 the Rockefeller Center switched its Christmas lights from incandescent bulbs to far more energy efficient LEDs and fitted the building with solar panels to help create a more efficient tree. But solar panels can only do so much (their solar generator can produce only about 70 kilowatts of energy) and the NYC grid is responsible for making up the difference, via power plants that produce a whole lot of carbon:

Cutting down and shipping a 10-ton tree also puts a strain on the environment, but not nearly as much as one might expect. This year’s Christmas tree comes from Ulster County in upstate New York, only about 80 miles from Rockefeller Center. Assuming that the 115-foot trailer lugging the tree ran on diesel, the carbon emissions were likely no more than 4.6 kilograms of CO2 per mile—or about 0.37 tons emitted throughout the entire trip.

The loss of the tree itself won’t cost too much carbon, either. Trees pull CO2 out of the atmosphere in a process called carbon sequestration, and the amount of sequestration that a tree is capable of is usually calculated based on its dry weight (roughly 7.25 tons per 10 tons of tree). Before the Rockefeller Center chopped down the tree, it likely removed 0.158 tons of carbon per year from the atmosphere. In the greater scheme of carbon emissions, that’s not a whole lot.

But those darn Christmas lights.

Even if the entire project ran on solar power (which is impossible because NYC is cloudy, and because the solar-generation station is tied to the Rockefeller Center grid), that would result in about 22 tons of carbon emitted throughout the entire season, equivalent to the emissions emitted from driving about 80,000 miles in a NYC taxi.

Since those 70 kilowatts are used to power the entirety of Rockefeller Center, it’s safe to assume that the Christmas tree itself is, for all intents and purposes, drawing directly from the power grid. If so, the math is fairly straightforward. Each LED Christmas light operates at about 0.002 kWh per hour, so the current setup of 45,000 lights should come to approximately 107 kWh per hour total. Since the Rockefeller Center tree will be lit for 654 hours this year, that’s around 70,038 kWh total. Coal-fired power stations release roughly 1.5 lbs. of carbon for every kWh, so we’ve got 108,588 lbs. of carbon, or 54 tons (give or take, depending on the number of coal-fired power stations that are actually contributing to the NYC grid).

For those of you who are visual learners, here’s the math:

Correction: An earlier version of this story included a calculation error. We have corrected the visualizations and the data to reflect more accurate figures for carbon emissions from LED lights. Special thanks to Richard Ludlow of Cardiff University, who helped us tackle some of the trickier numbers.