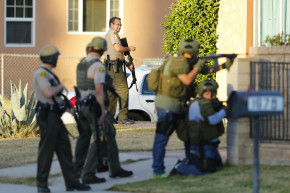 The FBI, Homeland Security and police departments across the country want you to know that if you end up in a mass shooter situation, you should be prepared to attack the gunman—even if that means wrapping your belt around your hand.

The most-viewed active shooter preparation video on YouTube was funded by the Department of Homeland Security and produced by the City of Houston’s Mayor’s Office. It’s featured on the FBI website and several local government and law enforcement and college sites from across the country.

The video cost $180,000 to produce and was released days after the Aurora, Colorado, shooting. It combines the violence you’d expect from a mass shooting dramatization with the bad acting and cheesy narration you’d expect from an anti-drug PSA. It begins with a man who looks like Bruce Willis’ stunt double approaching an office building.

The voiceover warns: “It may feel like just another day at the office. But occasionally, life feels more like an action movie than reality. The authorities are working hard to protect you and to protect our public spaces. But sometimes, bad people do bad things.”

Bootleg Bruce then pulls a tactical shotgun out of a duffle bag and starts blasting holes into a police officer and innocent bystanders.

The Run-Hide-Fight video encourages civilians to: “Attempt to incapacitate the shooter. Act with physical aggression. Improvise weapons. Commit to your actions.”

One scene depicts four office employees about to maul the shooter with a fire extinguisher, coffee pot, chair and belt. The man who wraps his belt around his hand inexplicably decided to use this weapon instead of one of the two extra chairs.

The video is uncomfortable, and probably not in the way it was intended, but it does demonstrate the exact safety protocol that the FBI and Department of Homeland Security recommend—first, try to run away; second, try to hide in a safe room; and if neither of those work, then attack the attacker.

Houston officials decided to cut a scene from the film that advises the use of guns, because only 3 percent of Texans have a permit to carry concealed weapons. Nevertheless, the video depicts a plan that Ben Carson and gun rights advocates would approve of, and it’s a plan that more and more police departments are endorsing after incidents like the Virginia Tech shooting, where many of the victims who hid or played dead were still killed. A Texas State University analysis of 84 U.S. mass shootings between 2000 and 2010 showed that civilians were able to subdue or shoot an attacker in 16 cases. In several other cases, civilians took action and delayed the attacker.

Other videos about shooting response also focus on fighting back. A video produced by Ohio State University recommends bludgeoning a shooter with a fire extinguisher if running and hiding don’t work out.

A video made by pro-gun content producer MrMuscleBilly skips the hiding and running, and suggests throwing yourself at the shooter if you don’t have a gun on you.

But it’s probably better to listen to the government agencies who made a six-minute video from the price of a small house.