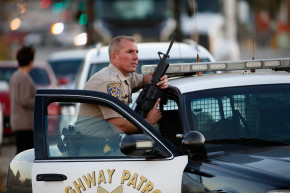 Mass Shootings: Why We Have No Idea Why This Keeps Happening
By Joshua A. Krisch

Mass Shootings: Why We Have No Idea Why This Keeps Happening

There is no national database on mass shootings, and the CDC isn't allowed to form one. Until we can study gun violence, we cannot begin to figure out how to stop it.

The United States sure seems to have a lot of mass shootings—but we can’t tell for sure, because the Centers for Disease Control and Prevention aren’t allowed to study it. Even now, after 14 have been confirmed dead in the deadliest shooting in the United States since Sandy Hook, there’s no robust national database on gun violence. And scientists can’t study the true extent and impact of gun violence without reliable data to evaluate.

Congress first blocked the CDC from studying gun violence in 1996, when they threatened to strip their funding in response to complaints from the National Rifle Association about a bias in their preliminary studies. Although President Obama officially lifted the CDC’s self-imposed ban on gun violence studies by executive order after Sandy Hook, Congress has continued to slap frustrating riders, or spending conditions, on the CDC budget that (if not actually, effectively) restrict any dedicated funds for studying mass shootings. “It is possible to conduct firearm-related research,” CDC spokeswoman Courtney Lenard told the Washington Post in January. “But our resources are very limited.”

Now, several independent databases on mass shootings do exist, but they’re cobbled together from news clippings and wikipedia entries, and often define the very term “mass shooting” differently—even though the FBI (which maintains a list, but hardly a scientific database, of shootings) formally defines it as three or more deaths. Without consistent, reliable data, any attempt to pinpoint the problem and prevent mass shootings are effectively based on guesswork. Mother Jones and Stanford University provide two of the most reliable mass shooting databases, but even those report vastly disparate data:

Only hours before the San Bernardino shooting, a group of doctors lobbied on Capitol Hill (with a 2,000-strong petition) for Congress to lift the CDC ban once and for all. Unfortunately, they did not garner much support among Republicans. Although Ben Carson expressed his personal support for lifting the ban (“I say more information is better,” he told The Washington Post) many senior Republicans have historically pushed back. “The CDC is there to look at diseases that need to be dealt with to protect public health,” former Speaker John Boehner told PRI in 2013. “I’m sorry, but a gun is not a disease.”

That argument doesn’t make a whole lot of sense. The CDC tracks motor vehicle deaths, even though cars are not a disease—and, in fact, there’s an entire section of the CDC’s website devoted specifically to tracking injuries. Gun violence is the only high-profile trauma noticeably absent from the site, though the CDC does include firearm deaths in its official mortality reports.

That’s a problem, because we need to collect data on injuries (as well as illnesses) in order to prevent them from happening. CDC studies on car deaths have taught us that distracted driving is the cause of a ridiculous number of road deaths, and that teens who text while they drive are likely to be the culprits. The results of the study led to an executive order prohibiting all federal employees from texting while driving, and was the impetus for several states enacting laws against texting while driving. If we had national data on mass shootings—the psychological and demographic profile of an average shooter, the type of weapon used, the number of attacks per year—we could do more to prevent this from happening again.

Politicians on both sides of the aisle seem to misunderstand that, without data, we are flying blind. After the San Bernardino shootings, Democrats cried for stricter gun control laws while Republicans invoked the mental health crisis—but neither of them have a leg to stand on until we have better data on who kills and why they do it. In an interview with the Washington Post, David Price (Democrat from North Carolina) put it best: “We should all be able to agree that this debate should be informed by objective data and scientific research.”