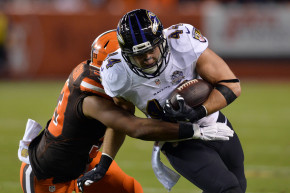 The Cleveland Browns’ #FactoryOfSadness Is Back
By Jeff Andrews

The Cleveland Browns’ #FactoryOfSadness Is Back

Despite a rich history of choking in big games, churning through quarterbacks at a comically high rate and using first-round draft picks on players who last half a second in the NFL, the sad-sack Cleveland Browns may have found the Browns-iest way yet to snatch defeat from the jaws of victory.

At home against intensely hated rival Baltimore on Monday Night Football, the score all-square heading towards the end of regulation, Browns fans watched Baltimore block the potential game-winning field goal, then return it for a touchdown … and the win.

If it weren’t the Browns, it would be an unbelievable loss. But it stings even more since it came against the Ravens, the team that used to be the Cleveland Browns before owner Art Modell famously moved the team to Baltimore (and subsequently won two Super Bowls). Meanwhile, the Browns, born again in 1999 by NFL expansion, have been completely, well, Brownsy. They’ve had two winning seasons since returning to the league and have made the playoffs only once. During that span, they’ve lost 42 games in the final minute, 22 on the last play, according to The AP’s Joe Reedy.

After having their hearts ripped out yet again, Browns fans took to Twitter to express their pain under the #FactoryOfSadness hashtag, which was used 839 times since the game, according to Topsy. The hashtag was born in 2011 when Cleveland comedian and Browns fan Mike Polk Jr. posted a YouTube video voicing his displeasure with the Browns. He ends the video by yelling at FirstEnergy Stadium “you are a factory of sadness!”

Now when tortured Browns fans get pushed over the edge–which is at the very least a triannual occurrence–they squeal in the form of #FactoryOfSadness. To wit:

Another plus is getting to hear my bf silently weep and laugh at the same time. Poor guy. #FactoryOfSadness

The best part about the last two Sundays, no Browns football. Thanks for ruining my Monday night and Tuesday morning. #FactoryOfSadness