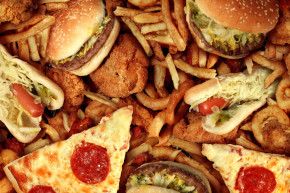 These Fast Foods Contain An Entire Day’s Worth Of Salt
By Joshua A. Krisch

These Fast Foods Contain An Entire Day’s Worth Of Salt

When NYC's top fast food chains begin posting salt warnings, someone is going to have a lot of work to do

New York City recently announced that all chain restaurants will be required to place an warning sign on dishes that top the recommended daily limit of 2,300 milligrams of sodium. The warning sign—a sort of traffic symbol emblazoned with a foreboding salt shaker—is supposed to alert consumers to the fact that, by ordering this single item off the menu, they have consumed a day’s worth of salt in one fell swoop

Vocativ examined the online nutritional facts posted by the the top ten fast food chains in the United States (McDonald’s, Starbucks, Subway, Burger King and Wendy’s) to see how many items each restaurant would have to label under the new regulations. Surprisingly, Subway—a company that has long advertised its offerings as more nutritious than other fast food options—topped the charts with no less than ten items that exceed daily salt limits. Starbucks and Wendy’s, on the other hand, did not have a single menu item that exceeded the 2,300 milligrams of sodium:

The average American consumes about 3,400 milligrams of sodium per day, or about one and a half teaspoons of salt. Studies have shown that high-salt diets increase the risk of high blood pressure and heart disease, but Americans are showing no signs of cutting back on their sodium.

Meanwhile, restaurant owners have bristled at the new requirements (which will result in sizable fines for companies that do not comply) saying that posting these anti-salt signs will be bad for business. “Every one of these cumbersome new laws makes it tougher and tougher for restaurants to find success,” New York State Restaurant Association President Melissa Fleischut told the Associated Press.