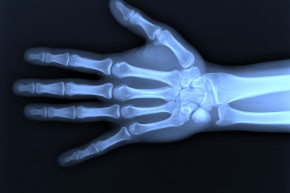 When You Crack Your Knuckles, Sparks Literally Fly
By Joshua A. Krisch

When You Crack Your Knuckles, Sparks Literally Fly

There's a lot of science out there on knuckle cracking. But, on ultrasound, sparks literally fly out of your knuckles

Scientists already know what happens when you crack your knuckles. We have grappled with this great scientific issue before—in a nutshell, when about seven kilograms of tension is applied to any one of your fingers, your knucklebones separate by about half a centimeter as the fluid that normally lubricates your joints forms a bubble in between the two bones, which then audibly pops.

See? Simple. There’s even a video of the entire process that circulated back in April, courtesy of PLoS:

But that’s not where the story ends. In a new study presented at the Radiological Society of North America, scientists from the University of California, Davis have taken the entire exercise one step further, and found that the cracking noise is likely due to the formation of the joint fluid bubble (—and not, as previously thought, its bursting. The findings are likely to burst the bubbles of several researchers focused on knuckle-cracking science.

The question of exactly when a knuckle cracks is “a surprisingly hard thing to tease out,” says Dr. Robert Boutin, professor of radiology at the U.C. Davis School of Medicine. Indeed, as of 1971 the scientific community was (very reasonably) fairly certain that when your knuckles crack the popping sound was the sound of a joint fluid bubble popping. But in April of this year, researchers produced the above MRI video and claimed that the telltale knuckle crack is actually the sound of a fluid bubble forming—not popping. Boutin resolved to join the fray.

So Boutin and his team filmed the entire process in slow-motion using an ultrasound machine, recorded audio and video, and then used special linguistics software to sync up the two tracks. They found that the knuckle cracking sound consistently came before the bubble of joint fluid burst, suggesting that the crack is not the sound of a bubble popping (and siding with the April findings). “We consistently observed there was a time interval,” Boutin says. “We heard the crack, time passed, then we saw the flash.” See for yourself:

The entire process, Boutin explains, takes only about 10 milliseconds from start to finish and focuses on something incredibly small—a gas bubble forming in joint fluid. For that kind of speed and resolution, an ultrasound is superior to an MRI, Boutin says. “If you want to see something happening pretty fast, faster than the blink of an eye, it’s helpful have a technique that is very fast. Furthermore when it comes to spatial resolution, with ultrasound you can see things ten times smaller than an MRI.” And it doesn’t help that MRIs are loud machines. With an ultrasound, it is much easier to detect the subtle popping sound of a knuckle.

“MRI is really loud,” Boutin says. “There’s no way you can hear something like a cracking knuckle. With ultrasound, on the other hand, you can hear the crack and see the flash coming into the joint.” Here’s another ultrasound. See if you can spot the flash (or the gas bubble popping within the joint):

Beyond the utter coolness of watching knuckles crack on MRI and ultrasound, these sorts of studies have practical applications for older adults suffering from arthritis, often due to changes in the fluid that lubricates their joints. “As people age, they tend to get osteoarthritis and their joint fluid viscosity changes,” Boutin explains. The more we understand about how joint fluid functions—from popping gas bubbles to lubricating old joints—the better we can serve an aging population.”