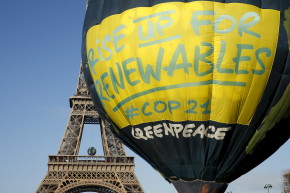 These Countries Are Not Prepared For Climate Change
By Joshua A. Krisch

These Countries Are Not Prepared For Climate Change

World leaders at the COP21 climate change summit plan to set a new agenda for curbing emissions this week. But that'll be easier for some countries than others

The 2015 Paris Climate Conference climate summit kicked off on Monday with a somber introduction from United Nations Secretary General Ban Ki-moon. “A political moment like this may not come again,” Ki-moon said at the Paris summit. “We have never faced such a test. But neither have we encountered such great opportunity.”

Indeed, fighting climate change on a global scale is likely to be one of the “key challenges of our time,” to paraphrase President Barack Obama. Part of the problem is that different countries (and governing bodies) each have their own ways of handling climate threats, and some are more enthusiastic about curbing emissions than others. Fortunately, a new study from Notre Dame University spells out many of these challenges on a country-by-country basis. Here’s a breakdown of their data:

Researchers defined each country’s climate readiness by their “ability to leverage investments and convert them to adaptation actions,” according to the study. In ranking the countries, scientists analyzed economic readiness (whether local businesses could put climate-related investments to use), governance readiness (political stability) and social readiness (whether the population is open to innovating to prevent climate change).

More These At-Risk States Are Not Ready For Climate Change

Equatorial Guinea is the only upper-income country on the list with a poor readiness rating (rank #176 out of 184). It is noteworthy that this data was collected throughout 2014 and that, in September 2015, Equatorial Guinea submitted its first concrete plans for fighting climate change.

The United States is considered fairly well-prepared to respond to climate change, with an overall rank of 15. But, as prior studies have shown, the U.S. is a bit of an anomaly—many states in the U.S. are larger in size, population and emissions than several entire countries on the list. And the level of preparedness for climate-related disasters varies widely between states. Here’s a breakdown of that data, based on a study conducted by Climate Central and ICF International: