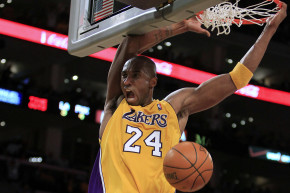 Kobe Bryant’s announcement on Sunday that he will retire at the end of the season prompted sweeping displays of respect and thanks for the NBA star across social media.

Rounding out the top five were #ThankU, #Legend and #GOAT, short for the “greatest of all time.”

With 20 seasons under his belt, five NBA championships, two Olympic gold medals and more than 32,000 points scored, it’s clear why Bryant is praised. “Kobe Bryant is one of the greatest players in the history of our game,” NBA commissioner Adam Silver said in a statement. “Whether competing in the Finals or hoisting jump shots after midnight in an empty gym, Kobe has an unconditional love for the game.”

“I join Kobe’s millions of fans around the world in congratulating him on an outstanding NBA career and thank him for so many thrilling memories,” Silver added.

We have lived incredible moments together on and off the court. Thanks for everything brother! @kobebryant #ThankYouKobe

Despite not letting my @suns win a championship, it’s still very sad to see you go @kobebryant. The game won’t be the same again! #respect

Legends never die 🏀. @kobebryant love u for the memories. And friendship God bless u and… https://t.co/GEXEHMxPo6 pic.twitter.com/MGy0eIjXN0