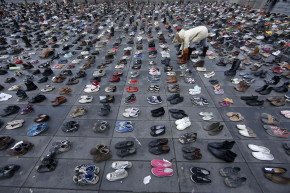 More than 200,000 people were expected to march at the Place de la Republique in Paris on Sunday but were forbidden due to security concerns

More than 100 world leaders including President Barack Obama are meeting in Paris on Monday for a U.N. summit aimed at reaching an agreement to cut greenhouse gas emissions.

Ahead of the much-anticipated talks, which will continue over the next two weeks, at least 10,000 pairs of shoes stood in a central Paris square on Sunday in the place of absent demonstrators who had planned to take to the streets to urge world leaders to act on climate change.

Some shoes had plants inside of them, and many had signs tied to them with messages supporting policies aimed at ending climate change. The protesters themselves were kept away because of security concerns following coordinated terror attacks that killed 130 across the city this month.

Here are the shoes–a silent march at Place Republique. Staggering in sorrow and dignity. #climatemarch pic.twitter.com/k7PyXiW3DW

United Nations Secretary General Ban Ki-moon and Pope Francis both donated pairs of shoes to stand in solidarity with the demonstrators, according to The Guardian. Avaaz, an organization involved in planning the marches in Paris, told the British newspaper on Sunday it planned on donating the shoes to a group that works with homeless people.

Later on Sunday, around 200 protesters clashed with police in the French capital. Authorities used tear gas and batons to clear them away from a street leading to the Place de la Republique. Around 100 of them were arrested, The Guardian reported. After the clashes died down, hundreds of people formed a human chain around Paris, wearing shirts and signs with messages against global warming.