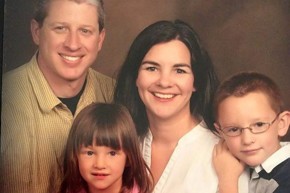 Officer Garrett Swasey was one of three people killed during the attack at a Planned Parenthood in Colorado. Hundreds are now raising money for his family

Hundreds are rushing to support the family of the courageous Colorado police officer killed in Friday’s Planned Parenthood rampage.

A crowdfunding campaign launched for the wife and two children of Officer Garrett Swasey raised more than $27,000 within its first few hours on Saturday, with thousands more in donations likely to pour in over the weekend. Swasey, who also served as a volunteer pastor, was one of the first officers to respond to the Colorado Springs clinic where suspected gunman Robert Lewis Dear allegedly opened fire on Friday morning.

Three people were killed and another nine injured during an hours-long gun battle, which ended with the 57-year-old suspect in custody. The attack on Planned Parenthood came after a national movement tried to defund the women’s health organization, which, among a host of other health services, provides abortions. A motive for the attacks has not been established.

Though Swasey personally opposed abortion because of his faith that did not get in the way of his duty on Friday, Swasey’s co-pastor at the Hope Chapel in Colorado Springs told the New York Times. “I don’t think that was on his mind,” said Scott Dontanville. “He was there to save lives. That’s the kind of guy he is.”

A champion ice skater, Swasey joined the police force at the University of Colorado-Colorado Springs six years ago. Friends and relatives described him as a devoted father and husband who drew his inspiration from his Christian faith. Strangers offered words of condolence and grief for the officer and his family throughout Saturday.

Thinking of all friends and family of the victims of the shooting yesterday. Especially those of Garrett Swasey, RIP, hero.

Prayers and love to the surviving loved ones of Officer #GarrettSwasey who died in the shooting at #PlannedParenthood. #BlueLivesMatter

Even President Obama hailed the hero cop by name as he spoke out against the shooting. “May God bless Officer Garrett Swasey and the Americans he tried to save,” Obama said. “And may He grant the rest of us the courage to do the same thing.”