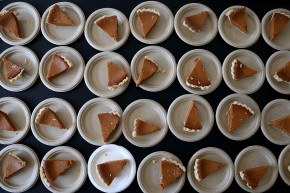 Bring On The Leftovers: Most Americans Don’t Care About Losing Weight
By Caroline Linton

Bring On The Leftovers: Most Americans Don’t Care About Losing Weight

Those Black Friday trips to the gym might not be as crowded as you think.

Moreover, less than a quarter of adults say they are “seriously” trying to lose weight, the lowest amount since 2002, Gallup found.

More The Thanksgiving Side Dishes And Desserts You Love The Most

One thing that seems to be constant, though, is that people continued to talk about weight as they delved into the Thanksgiving holiday.

Still, it looks like most won’t feel guilty digging into Turkey Day leftovers. Gallup found that the majority of Americans, 56 percent, are likely to describe their weight as “just right.” The number of Americans in that category steadily increased since the 1990s, although it has remained consistent since 2008.