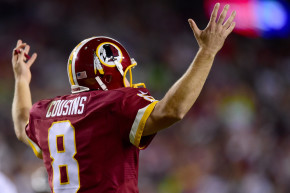 "This can't be real" one user tweeted

It looks like Redskins are giving everyone a side of offense for Thanksgiving.

The football team sent out a tweet Thursday morning saying “Happy Thanksgiving” with their logo, which struck many as clueless at best or offensive at worst.

Wishing you and your family a Happy #Thanksgiving. pic.twitter.com/qI3U7hbGhK

The Redskins have been under pressure the past few years to change their name, given the offensive history of the term “redskin.” In 2013, Redskin owner Dan Snyder insisted they will “will never change the name of the team.” In August, the team doubled down and said it would not change its name even if it became a barrier to finding space for a new stadium in the nation’s capital.

Given the tragic history of Native Americans in the U.S., many called out what seemed like insensitivity in the Redskins’ tweet.

This can't be real https://t.co/nZzJoIBj7a

Anybody else see something wrong with this? https://t.co/oXIrQhVGzI