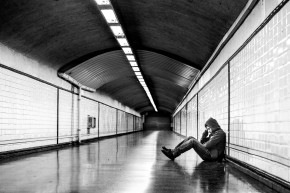 Here’s How Feeling Lonely Can Make You Sick
By Joshua A. Krisch

Here’s How Feeling Lonely Can Make You Sick

Loneliness can hurt us in more ways than one

Nobody deserves to be alone on Thanksgiving, but studies suggests that loneliness is, biologically-speaking, more complex than those pangs of guilt and nostalgia you feel around the holiday season. In a new paper published this week in the Proceedings of the National Academy of Sciences, researchers describe what happens to your body when you’re feeling lonely and suggest that loneliness triggers measurable changes that can actually cause disease.

Prior studies have shown that feelings of isolation and loneliness can increase rates of premature death in older adults by 14 percent, but until recently scientists had few ideas about the biological reason behind this phenomenon.

In a nutshell, it seems that loneliness stresses out our immune systems. The stress creates a sort of fight-or-flight response within your bone marrow, which produces immature immune cells called monocytes that are great at causing inflammation, but not very adept at fighting viruses. When you feel lonely for extended periods of time, your body produces even more of these stunted cells—weakening your immune system and ultimately leaving you vulnerable to disease.

More Happiness Is Contagious; Depression Is Not

Researchers figured this out by studying lonely humans and socially-isolated rhesus monkeys. They found that lonely monkeys and humans have high levels of norepinephrine (a hormone in charge of the fight-or-flight response) in their blood, and an unusually high number of these stunted, immature immune cells.

For more detailed experiments, the scientists turned to the monkeys. One group of monkeys was repeatedly exposed to stressful social conditions; new cage mates, for instance. Their blood tests showed high levels of both norepinephrine and stunted immune cells. The scientists then infected lonely and non-lonely macaques with SIV (the monkey equivalent of HIV) and found that lonely monkeys succumbed to the disease faster than others.

Now, besides being a truly bad day for a group of lonely monkeys (who were isolated, stressed out and then given monkey AIDS) the study represents one of the first steps toward understanding how loneliness takes its toll on our bodies. Studies have linked loneliness to depression, a disease that afflicts roughly 8 percent of the population within every two-week period, and this research represents one of the first steps to understanding the biology behind loneliness, stress and perhaps even depression. Studies like this one are only now beginning to chip away at the underlying causes of mental illness.

For now, though, the findings are little more than cells in a petri dish (and a score of sad monkeys). “Loneliness in humans is a risk factor for chronic illness and all-cause mortality,” the authors write. But, as for the specific biological reason why loneliness can make us sick, “future research will be required to confirm the specific neuroimmune interactions.”