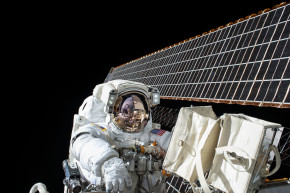 Data Profile: What A Typical ISS Astronaut Looks Like
By Leon Markovitz

Data Profile: What A Typical ISS Astronaut Looks Like

Crew members orbit Earth on the International Space Station, but they're not so international

Since the first International Space Station (ISS) expedition in November 2000, and counting the upcoming forty-sixth expedition set for December, 102 crew members will have been aboard the habitable satellite that orbits Earth.

Vocativ looked at their profiles, finding that even though they were on the International Space Station, they’re not so international, or diverse: They were born in 18 different countries, but nearly half of them were American-born and just 11 percent were women.

ISS crew members spend their days in orbit conducting research in a range of disciplines. They also take time to send messages—like one in which they shared their Thanksgiving plans to watch football and eat candied yams—and tweet pictures of Earth back to us earthlings.

#GoodMorning to all my friends in #NewYork and #NewJersey! #YearInSpace pic.twitter.com/K3byPaknEC

If you’ve never spotted the International Space Station, you pretty much only have yourself to blame. It orbits the earth at a speed of five miles every single second, which means it circles the globe about 16 times a day. It’s also the brightest object in the night sky (after the moon) because it has an acre of solar panels supplying it with 75-90 kilowatts of power, NASA says. You can look up the right time to see it at SpotTheStation.nasa.gov.