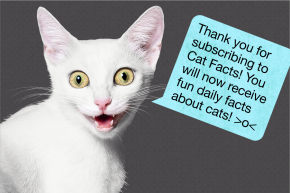 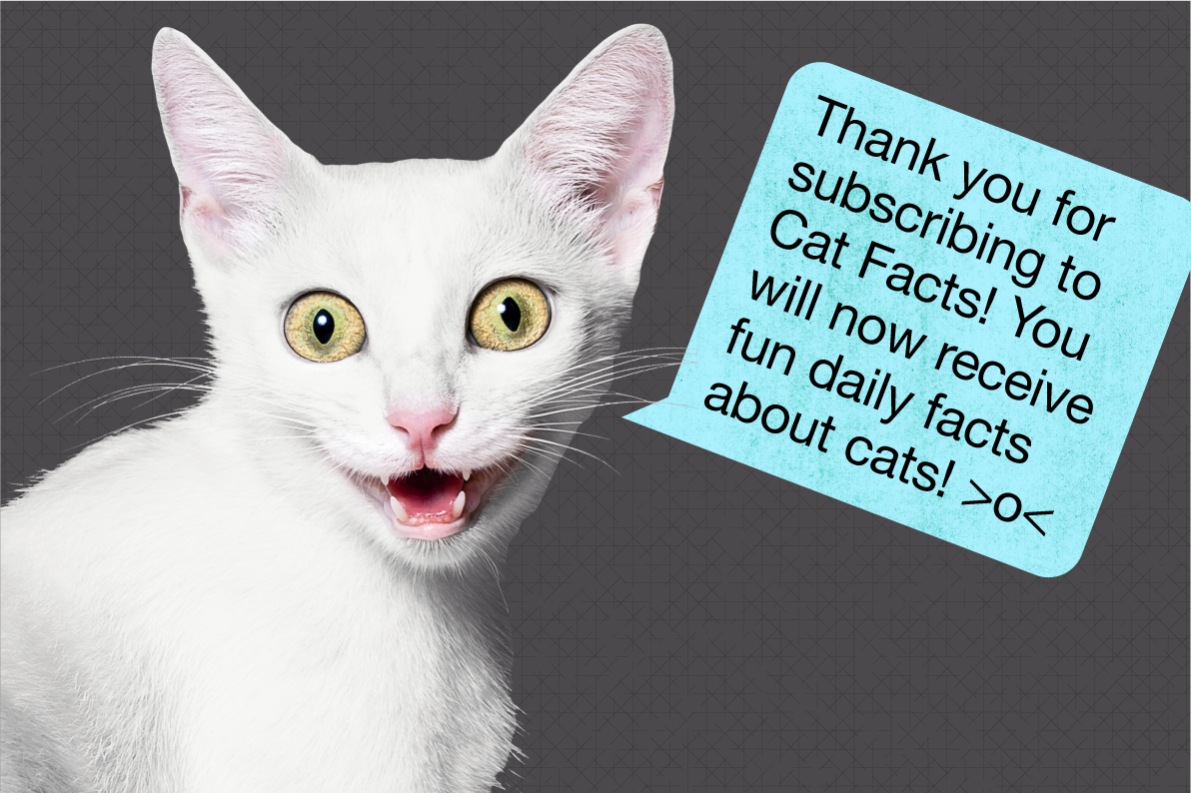 The Cat Facts text prank, the greatest thing to happen to text messaging since the invention of emojis, is in the midst of a revival. This week, #FakeCatFacts started trending on Twitter. And in late November an anonymous privacy crusader began texting Cat Facts to phone numbers Twitter users had posted publicly, only ceasing the onslaught of facts once the victim tweeted “Meow, I <3 catfacts” to Edward Snowden. Now, nearly four years after Cat Facts went viral, the woman responsible for the original outbreak is ready to let the cat out of the bag.

Like many people who use the Internet, I discovered Cat Facts in late January of 2012 when Redditor frackyou posted a text prank that she pulled on her cousin.

Inspired, I made a Google Voice number, then sent a text to Bryan, one of my best friends: “Thank you for subscribing to Cat Facts! You will now receive fun daily facts about cats! >o<”

Bryan fell hard. Here’s an artistic rendering of a portion of that exchange:

After 56 messages sent and several attempts made by Bryan to cancel his “subscription,” I finally let him off. But not before sending him one last message: “Thank you for subscribing to Horse Facts! You will now receive fun daily facts about horses! Neeeiiigh!”

I shared the entire conversation with our group of friends in a mass email, and they never let him live it down. Bryan has since forgiven me. “I am glad I can now look back on #catfact day and laugh,” he wrote in an email last year. “It was quite traumatic at the time.”

Of course, my Cat Fact story is just one of many that have shaped peoples’ lives.

The Woman Behind Cat Facts

Redditor frackyou is Allis Markham, a celebrated ethical taxidermist based in Los Angeles. Four years ago, Markham left her job as Disney’s director of social media strategy to pursue taxidermy full time. “That’s when I left bleeding edge technology and went on to a different type of bleeding edge.” Markham said.

Thanks to everyone who came to the tiger cub skinning last night at Prey #Taxidermy!

Since then she has worked at the Natural History Museum of Los Angeles, opened her own store and studio, Prey Taxidermy, and won two first place awards in the 2015 World Taxidermy Championship. She has been covered in The New York Times, Washington Post, Bloomberg, Elle, Refinery 29, Smithsonian, Mashable, The Hairpin and several other publications. Much has been written about her talent, about how she’s challenging stereotypes and providing a much-needed voice of feminism in taxidermy, about how hanging out with her is like having a “slumber party at a morgue” and about how she was the muse for the main character in husband David Iserson’s book, “Firecracker,” which Rolling Stone deemed one of the 40 best YA novels.

Back to the grind.

But none of those profiles or interviews ever touched on her greatest contribution to Internet culture—a Reddit post made in January 2012 that started an Internet sensation.

“I saw my cousin Robert posted on Facebook ‘I’m bored if anyone wants to call or text me or whatever go ahead here’s my number.’ He’s not in my phone and I’m not on his, so I knew he wouldn’t know my phone number,” Markham told Vocativ. “I just started texting him cat facts. I was quickly Googling stuff and half making up bullshit. I’m a taxidermist and I’m an armchair biologist, but I don’t know how many bones are in the tail of a cat.”

Cousin Robert freaked out like a kitty on catnip. “I could not have planned it better. He fell for it hook, line and sinker. I think he was a sophomore in high school at the time and he was flipping his shit. He also started calling the phone number and he was like ‘Fuck you.’ Then he kept responding the the texts.”

Markham took screen shots of the conversation and posted them on Reddit. Thanks to thousands of upvotes and a BuzzFeed pickup, Cat Facts exploded. “I hadn’t been on Reddit terribly long and I was tickled to death to see it taking off. I put it on Robert’s page and I was like, ‘You’re famous!’ I got a lot of messages. Everybody thought I was a guy. Everybody, everybody thought I was a guy.”

The Many Lives Of Cat Facts

Reporters also got her gender wrong. When TechCrunch featured a new Cat Facts app based on the “Epic Reddit Prank”, the article referred to Redditor frackyou as a he: “Cat Facts [app] creator Kyle Venn says he’s not the original Reddit user ‘frackyou,’ and didn’t reach out to him before creating this because that user was no longer active, and also, because it seems by the comments on the original post that ‘frackyou’ actually got the idea from another Redditor who liked that his idea was being used.”

Not only did the article get frackyou’s gender wrong, but the app creator misrepresented her Reddit activity. Markham continued to post on the site and is still active. What that article does get right is that Markham didn’t originally come up with the idea of Cat Facts. She was inspired by another Reddit post she had seen a few weeks earlier.

More Online Vigilante Will Punish You With Cat Facts, Until You Apologize To Snowden

In that post, the Redditor described a text prank in which he sent a stranger daily facts about cats. The Redditor, who goes by the handle imrobert, told Vocativ that he got the victim’s number by asking a friend to send him a random contact in his phone. He then sent that stranger cat facts every day for about a month until the cat fact receiver stopped responding. The Redditor said he, too, got the cat fact text prank idea from another post he saw on Reddit. He can no longer find the original post, so the true origins of Cat Facts could forever remain a mystery.

Neither he nor Markham are upset that someone else is possibly profiting off the prank with an app. “Honestly, good for him. I’m glad people are having fun with it,” Markham said. “At some point, nobody really owns a meme. A meme is a meme because people take it, they change it and they do things with it—and that’s great.”

Markham’s only regret is that she might have contributed to the death of CatFacts.org. “I imagine that it was run by little old cat ladies. Right after [the Cat Facts prank] went viral they put a disclaimer on their…front page,” Markham said.

CatFacts.org no longer exists, but Markham provided a screen grab of the home page from January 26, 2012, immediately after her post went viral. 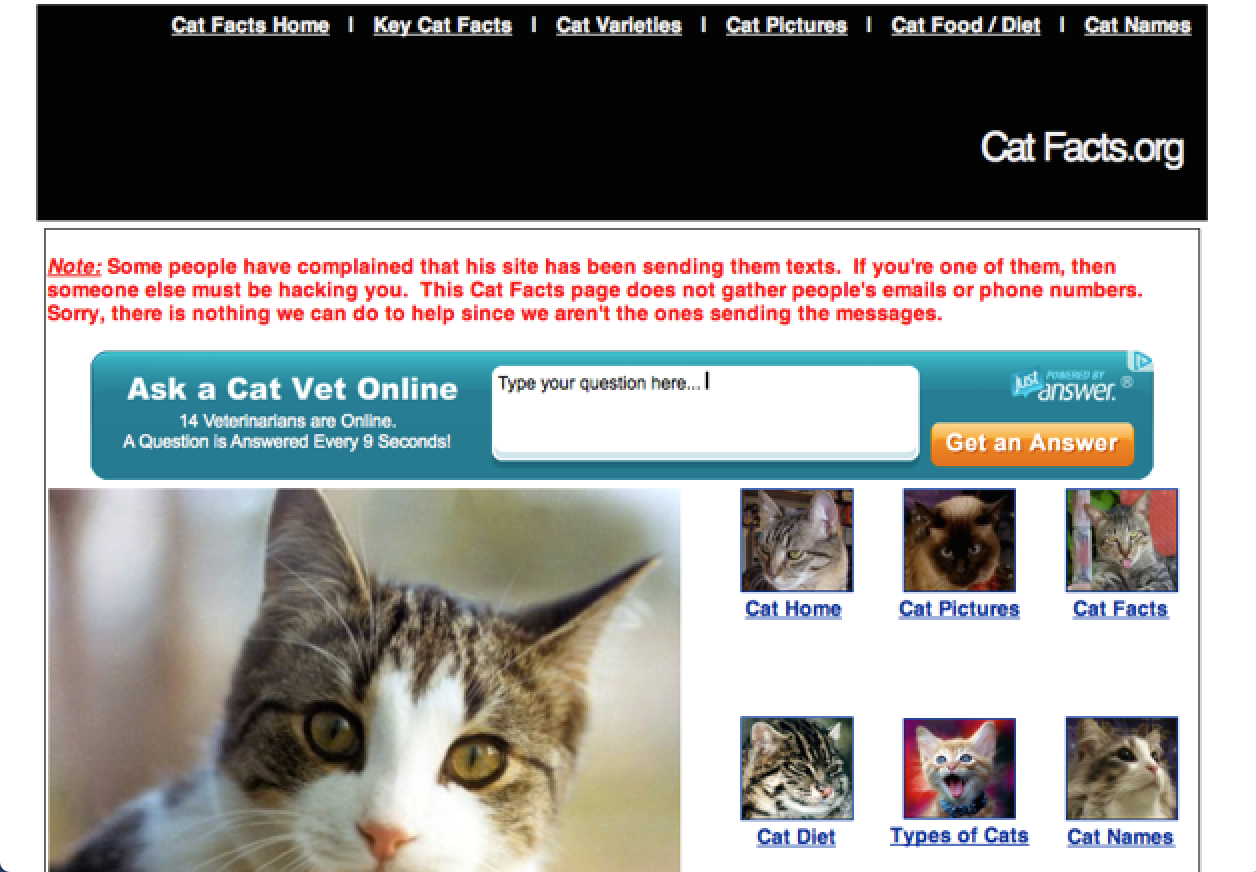 The Legacy Of Cat Facts

Markham has a theory for why Cat Facts took off: her generation was inspired by prank-call television—Jerky Boys, Crank Yankers, Bart Simpson and Moe Szyslak. “We all grew up prank calling. Prank texting is the modern prank call,” Markham said. “Plus everyone loves cats on the Internet.”

Perhaps that’s the reason that Cat Facts lives on nearly four years later, most recently as #FakeCatFacts and on Edward Snowden’s feed.

“The Snowden connection—that is crazy to me,” said Markham. “I love it…I hope it makes him happy.”

Markham said she is looking forward to the annual family Christmas tradition of reading out the original conversation between her and her cousin. But, while the prank still brings her joy, and while she loves animals so much that she has fostered dozens of dogs and spends her life preserving dead wildlife, she admits she is not a cat person.

“If you’ve ever busted a scent gland on mountain lion, you’d hate cats for the rest of your life, too,” Markham said. “I’ll just go ahead and say this. I just don’t like cats. You can print it. I don’t care. I don’t really like cats.”