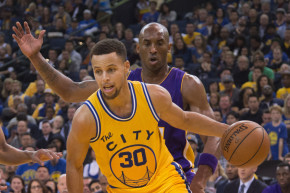 Golden State Warriors’ Start Is A New Record For the NBA

With a 16-0 start this season, the Golden State Warriors have blasted past a 21-year-old record

Stephen Curry’s Golden State Warriors broke a long-held record Tuesday night, and until they lose a game, they’re going to keep pushing that record out even further. With a 34-point victory against the Los Angeles Lakers, the Warriors are now 16-0, the best season start in nearly 70 years of NBA history. The record was previously held by the long-gone Washington Capitols and the Houston Rockets, with starting record of 15 straight wins in 1948-1949 and 1993-1994, respectively. Here’s a look at how teams throughout history compare.

The game also marked a new record for Warriors’ point guard and 2014-2015 NBA MVP Stephen Curry, who scored 24 points with nine assists on 10-of-21 shooting. The 2014 NBA MVP averaged 24 points with 8.5 assists per game last season, and was the first Warrior’s player in history to do so. “A lot of players who’ve played in this league, a lot of great teams, and nobody has accomplished what this team has tonight,” he said in an on-court interview on Tuesday.

Next, the Warriors will play the Phoenix Suns on Friday. The Suns are currently in sixth place in the Western Conference with a 7-7 record.