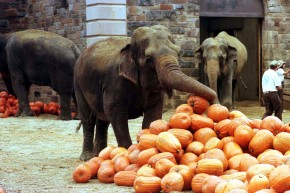 How Prehistoric Elephants Gave Us Pumpkin Pie
By Joshua A. Krisch

Here's how the extinction of wooly, prehistoric elephants like mastodons led to our penchant for pumpkins

Autumn is the season of the pumpkin and, according to a new study published in PNAS, we have prehistoric mammoths and mastodons to thank for our pumpkin pies, butternut squash soup and over-priced lattes. Or, more precisely, we have their extinction to thank for making pumpkins edible.

Roughly 12,000 years ago, pumpkins and related gourds tasted awful. Humans avoided them accordingly, but fossilized dung samples have confirmed that mammoths and mastodons didn’t get the memo. Those wooly, prehistoric elephants devoured ancient squash—their tastebuds couldn’t detect the bitterness, and their giant digestive tracts dealt with the Cucurbitacin toxin found in many species just fine.

Scientists suspect that pumpkins evolved just for this—to attract megafauna (and perhaps to discourage humans from taking a bite out of the pumpkin market). By evolving properties that were delicious to mammoths, the nascent squash species ensured that its fruit would be eaten by the giant mammals and that its seeds would be spread through mastodon migration (and poop). Humans and woodland creatures didn’t quite have the range or capacity to transport large amounts of squash seeds in their guts, the authors say, so pumpkins evolved to offend their palates.

But with the decline of the mammoths and mastodons, pumpkins (and the entire genus Cucurbita of which they are a member) were in trouble. There weren’t anymore mastodons or mammoths to eat them and help them spread, and their ecosystem became crowded with squash and other uneaten plant species. From the paper:

We hypothesize that the disappearance of large herbivores struck a critical ecological blow against wild Cucurbita…Directly, megafauna consumed Cucurbita fruits and dispersed their seeds; wild Cucurbita were likely left without mutualistic dispersal partners in the Holocene because they are unpalatable to smaller surviving mammals with more bitter taste receptor genes…and vegetative changes following the megafaunal extinctions likely crowded out their disturbed-ground niche. Thus, anthropogenic landscapes provided favorable growth habitats and willing dispersal partners in the wake of ecological upheaval.

So pumpkins had to think fast (or, as fast as an admittedly inanimate gourd can “think”). Researchers say pumpkins sort of met humans halfway. Humans began eating the less bitter varieties of the pumpkin, eventually selecting out the more bitter genes, then they selectively bred the tastiest ones while the bitter squash died out. Gradually, the squash family transformed into those edible, oddly-shaped gourds that we know and love—and the rest is pumpkin-spiced history.